GENEVA  — Countries may gain time in the short-term as they limit travel to fight the new coronavirus pandemic, but the World Health Organization thinks overall that “it doesn’t help to restrict movement,” a top adviser to the U.N. health agency’s chief said Thursday. 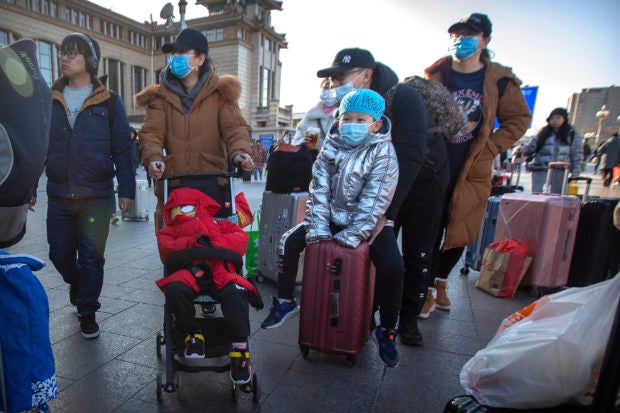 Travelers wear face masks as they walk outside of the Beijing Railway Station in Beijing, Monday, Jan. 20, 2020. China reported Monday a sharp rise in the number of people infected with a new coronavirus, including the first cases in the capital. The outbreak coincides with the country’s busiest travel period, as millions board trains and planes for the Lunar New Year holidays. (AP Photo/Mark Schiefelbein)

Dr. Bruce Aylward, who led a WHO team in China during the raging COVID-19 outbreak there last month, said in an interview that travel bans “generally aren’t part of the armamentarium you bring to bear on something like this.”

Aylward spoke a day after WHO Director-General Tedros Adhanom Ghebreyesus said the worldwide spread of the virus now qualified as a pandemic and President Donald Trump announced temporary entry bans on travelers from most of Europe. Other countries also stepped up cross-border restrictions.

He acknowledged that “people are confused” about the virus. He advised frequent hand-washing and other sanitary practices to avoid infection and getting tested quickly when someone suspects they’ve been exposed to the virus.

Aylward also sought to dispel some myths and misconceptions about the virus. He said people shouldn’t worry about goods shipped from places with significant case numbers and remember that “sniffles” aren’t a symptom of COVID-19 but a high fever and dry cough are.

He alluded to comments by some that warmer weather might snuff out the virus.

“Many people ask, ‘Will this go away with the winter season?'” he said, noting that the epidemiological approach calls for locating and tracking the virus, and getting infected people out of circulation..

The vast majority who become infected recover. The World Health Organization says people with mild illness recover in about two weeks, while those with more severe illness may take three to six weeks to recover.

While the elderly or those with preexisting health conditions are considered most at risk, “people 30, 40, 50-years-old get sick with COVID,” Aylward said. “Most of them will recover and be fine. Some of them won’t. And some of them even will die.”

Aylward said he had “phenomenal confidence in the ability of the U.S. to get this under control,” noting how many epidemiologists in China — which has succeeded in minimizing new cases — had trained in the United States.

“They know how to do this stuff,” he said of the U.S. experts. “And they’ve trained thousands of people across the U.S. to get organized. You mobilize that army, and you beat this most recent of enemies.”