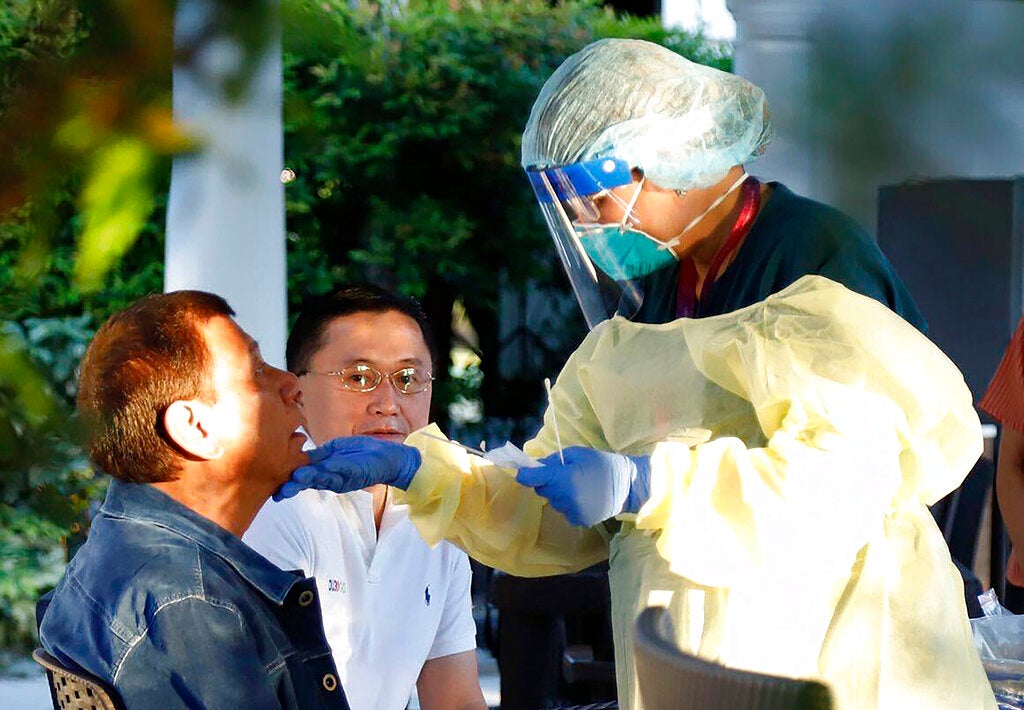 President Rodrigo Duterte has undergo testing for the new coronavirus, Sen. Christopher “Bong” Go said on Thursday as the Senate building was shut down to be disinfected over an exposure scare.

The Department of Health (DOH) has reported a spike in infections this week, confirming the second death in the outbreak on Wednesday night—a 67-year-old Filipino woman who had neither traveled abroad nor met an infected person.

Most of the new cases are elderly people. Mr. Duterte, who at 74 is in the vulnerable age group for the virus, will be tested because he has been in regular contact with some officials who have been exposed to people who have tested positive for the bug that is causing the disease called COVID-19.

Prudent thing to do

It is also feared that he was exposed to a coronavirus case during the inauguration of the North Harbor Luzon Expressway Harbor Link in Caloocan City last Thursday.

“It is just prudent for us to take precautionary measures in compliance with the advice of our health officials,” said Go, a former longtime aide of Mr. Duterte.

Go said he, too, had been tested.

Presidential spokesperson Salvador Panelo confirmed that the President and Go would be tested.

“While the President and Senator Go do not have the symptoms of the virus, they have opted to undergo the test to ensure that they are fit and healthy to perform their duties as government workers,” Panelo said in a statement.

“They are undertaking this preemptive stop as per advice of health officials given that they have regularly engaged with Cabinet officials, some of whom have opted to undergo self-quarantine as they were exposed to those infected with [the virus],” he added.

Panelo said the Palace would release the results of Mr. Duterte’s test for the information of the public.

In the meantime, Mr. Duter­te’s public engagement involving crowds have been suspended and his foreign trips postponed on the recommendation of the DOH.

The President, however, received new Chinese Ambassador to the Philippines Huang Xilian in Malacañang on Wednesday night. The Palace said Mr. Duterte thanked China through Huang for his government’s socioeconomic programs.

On Wednesday night, Senate President Vicente Sotto III reported that the Senate building would be locked down for disinfection after a resource person who attended a public hearing held by the basic education committee last Thursday tested positive for the coronavirus.

Sen. Sherwin Gatchalian, the committee chair, and Sen. Nancy Binay, who took part in the hearing, decided to go into self-isolation, Sotto said.

Gov. Benjamin Diokno of the Bangko Sentral ng Pilipinas announced on Thursday that he, too, would go into self-isolation because a person that he met at the Caloocan event with Mr. Duterte had tested positive for the coronavirus.

Zubiri suggested that all the senators be tested, but Sotto said it should be voluntary.

Sen. Aquilino Pimentel III, who talked with both Gatchalian and Binay on Wednesday, said he did not see enough scientific basis to go into self-quarantine. Besides he had a lot of things to do, he said.

Sotto said the Senate building was given an initial disinfection on Thursday, but he was arranging a full decontamination inside and outside with a specialist and it would be done in the next few days. He clarified that the building was not really locked down, but was only on restricted access.

“The Senate has to continue to function. The Filipino people need us today and we cannot let the threat and scare of an infection distract us from work,” he said.

Those who show symptoms or who have traveled to highly contaminated places should go into self-quarantine, he said.

Education Secretary Leonor Briones and other education officials who attended the hearing called by Gatchalian’s committee have quarantined themselves at home, the Department of Education said on Thursday. It did not name the other officials but said they and Briones were asymptomatic.

In the House of Representatives, two lawmakers who attended the Caloocan event with the President last Thursday went into self-quarantine, according to House Secretary General Jose Luis Montales. He did not name the two lawmakers.

Four other members of the House—Representatives Isidro Ungab of Davao City, Julienne Baronda of Iloilo City, Eric Martinez of Valenzuela City and John Reynald Tiangco of Navotas City—said in separate statements that they had gone into self-quarantine as they were also with Mr. Duterte at the event.