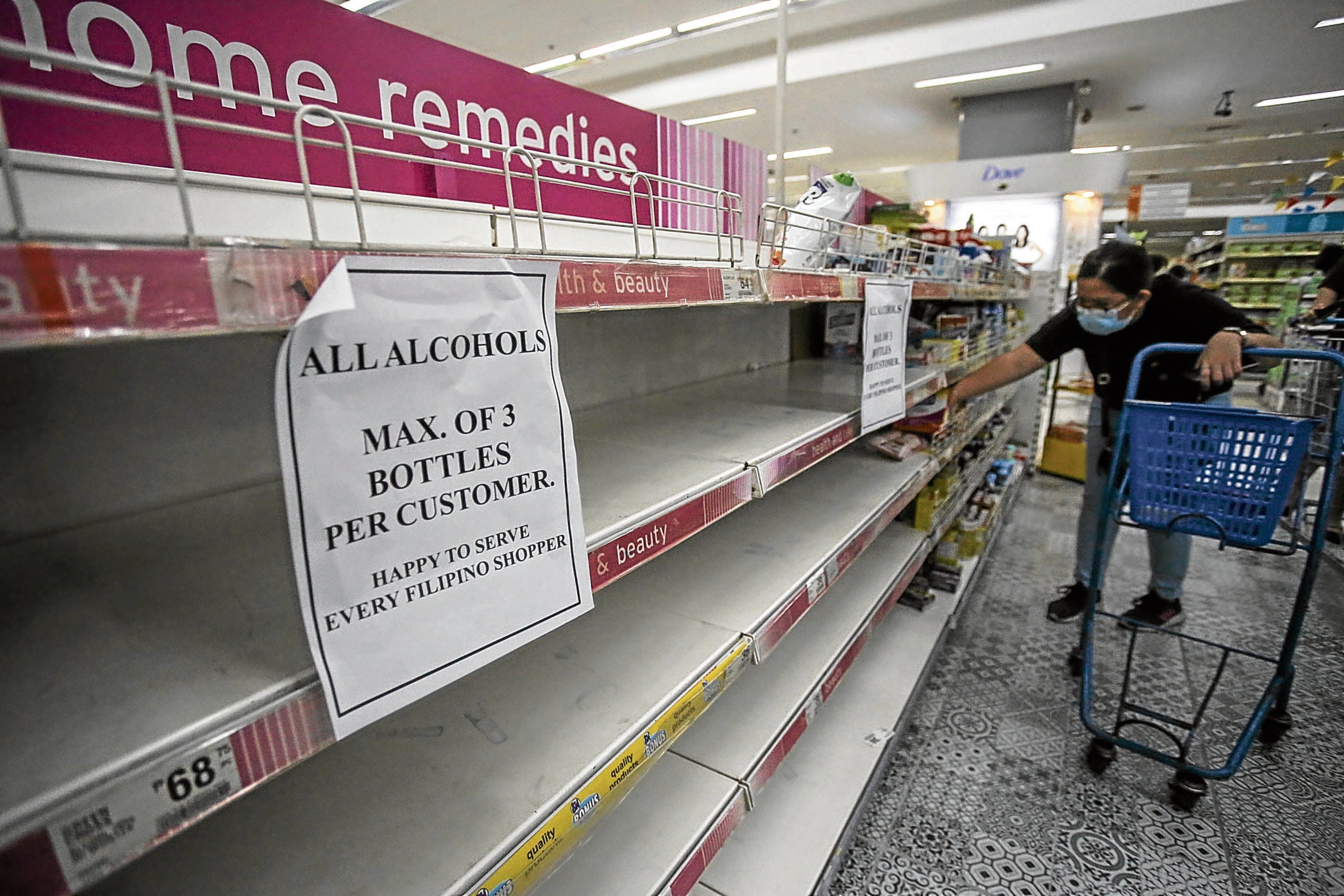 EMPTY SHELVES Supplies of rubbing alcohol have vanished due to panic buying on Thursday at this Quezon City supermarket. The government has warned and threatened legal action against hoarding, amid the rise in coronavirus cases mostly in Metro Manila. —JAM STA. ROSA

As Filipinos stocked up on necessities following reports that the new coronavirus contagion had reached Metro Manila, the Department of Trade and Industry (DTI) on Thursday announced a nationwide price freeze on basic goods and Malacañang warned that hoarders would “be dealt with accordingly.”

The DTI said the price freeze on basic goods—from rice and tinned fish to essential drugs—would be in effect for 60 days, unless lifted sooner by President Duterte.

Mr. Duterte’s declaration of a state of public health emergency on Monday sparked the price freeze, which took effect on Tuesday but was announced only on Thursday.

“The DTI is closely coordinating with other government agencies, manufacturers and retailers of basic goods to ensure availability and continuous supply of basic goods in the market,” Trade Secretary Ramon Lopez said in a statement.

“Retailers are reminded that there should be no price movement on these goods while the price freeze is in effect,” he added.

The price freeze on LPG and kerosene is good for only 15 days, as provided for in Republic Act No. 10623 or the Amended Price Act.

Violation of the price freeze carries a fine of P5,000 to P1 million, or a prison term of one to 10 years or both.

The DTI also proposed an executive order that would authorize the police to inspect stores and arrest hoarders and profiteers.

No details were available as of press time on Thursday.

They will be arrested

Malacañang warned that “those who unscrupulously take advantage” of the crisis would be arrested.

“The Office of the President hereby gives warning to those hoarding vital commodities, which create a hike in the prices, as well as selling them beyond their regular prices, that their actions will be dealt with accordingly in pursuance of public safety and order,” presidential spokesperson Salvador Panelo said in a statement.

Hoarding carries a prison term of five to 15 years and fine of P5,000 to P2 million.

Most supermarkets in the metropolis were out of alcohol and other disinfectants on Thursday. They reported that tinned goods were also “bestsellers.”

The run on disinfectants followed advice from the DOH and private health experts to wash hands and use disinfectants often to keep off the virus.

On Thursday, the DTI said manufacturers of disinfectants and other basic goods assured it during a recent meeting that they had enough stocks to meet the surge in demand.

Green Cross Inc. and Philusa Corp. said their stocks were good for months and they committed not to raise their prices, the DTI said.

Representatives of supermarkets SM, Robinsons and Puregold were also at the meeting and assured the DTI that their stocks of basic goods were good for two months, the agency said.

It said the groups agreed with Lopez that alcohol purchases should be limited to “two bottles” per shopper.

Mercury Drug reported that it maintains a month’s stock of medicines, the DTI said. The National Food Authority gave assurance that the country had sufficient stocks of rice, it added.

“Consumers need not worry as we have enough stocks of basic goods in the market. The DTI is working closely with the manufacturers and retailers to ensure continued flow of supply in the market and reasonableness of prices of basic goods, including disin­fectants,” Lopez said.

The DTI urged the public to report hoarding, profiteering, and other forms of price manipulation at One-DTI (1-384) Hotline or [email protected]

The run on basic goods has prompted the Department of Agriculture to develop an action plan on food availability.

On Wednesday night, Agriculture Secretary William Dar instructed his department’s officials to draw up a plan “on how to sustain the food supply for Metro Manila initially, and the whole country eventually.”

The agency is also intensifying its urban gardening program to cushion the impact on food by such emergencies as the coronavirus pandemic.

Glenn Panganiban, assistant director at the Bureau of Plant Industry, said his group had been distributing seeds and providing training to people in Metro Manila to encourage residents to grow their own produce. —REPORTS FROM ROY STEPHEN C. CANIVEL, JULIE M. AURELIO AND KARL R. OCAMPO