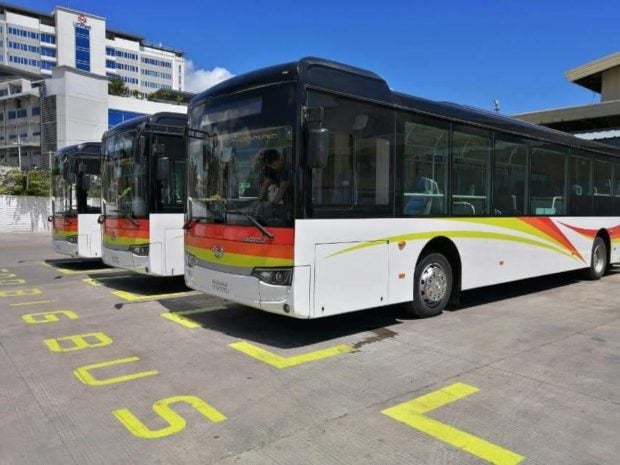 CEBU CITY—At least 20 modern buses will service commuters in this city starting March 16 to prepare residents for the Bus Rapid Transit (BRT) that is aimed at easing road congestion here.

A precursor to the BRT system, the Cebu Interim Bus Service (Cibus) is seen to augment the local transport system and address gridlocks in Cebu City.

“After a long wait, the Cibus will be operational. It will serve for the convenience of Cebu commuters until the Cebu BRT, which is designed to accommodate a larger passenger volume, is established and is up and running,” Transportation Secretary Arthur Tugade said in a statement on Wednesday.

Tugade said Cibus mimicked BRT, which is set to be completed by the end of 2021.

Cibus units will pick up and drop off passengers in 17 designated stops from South Road Properties in the city’s southern section until Fuente Osmeña, the uptown district. Each bus carries 48 sitting and 16 standing passengers or equivalent to the capacity of four jeepneys.Martin Delgra, Land Transportation Franchising and Regulatory Board (LTFRB) chair, described Cibus as a “transportation changer” to Cebuanos, many of them tired of dealing with the city’s traffic jams.

“Absolutely, there would be major changes in our streets and the level of service will improve substantially. You will now have a modern bus service before the full implementation of the [BRT],” said Delgra during a meeting with Presidential Assistant for the Visayas Michael Dino on March 5.

Delgra said Cibus would not only give the public access to modern buses but would offer regular service intervals, a definite travel time and automatic fare collection system.

Cibus will use the transit access pass card, a form of electronic ticketing payment. The LTFRB has set the fare at P11 for the first 5 kilometers, with an additional P2.50 for each succeeding kilometer.

Vallacar Transit Inc., the company behind the Ceres Liner Buses, is operating Cibus.All buses under the system are compliant with the government’s public utility vehicle modernization program, with low-floor, high-capacity buses.

Mayor Edgardo Labella said: “The Cibus will be performing a critical function in linking Cebu City with the rest of the province through its fleet of buses until the BRT is completed to serve our commuters.” —REPORTS FROM ADOR VINCENT MAYOL, KRIXIA SUBINGSUBING AND MIGUEL CAMUS