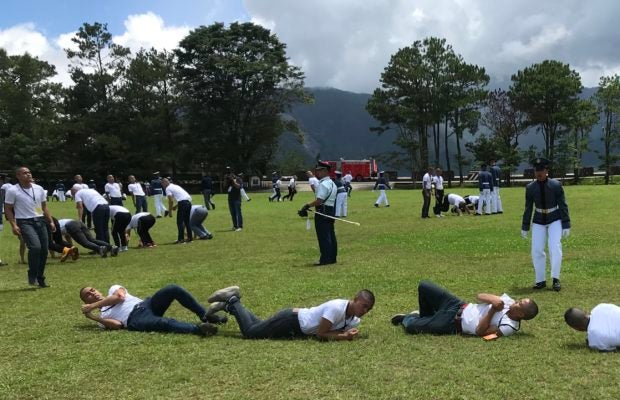 FIRST DAY. Members of Philippine Military Academy Class of 2023, who will be given their recognition rites on Saturday (Mar. 14) , first stepped foot at the Fort Del Pilar Borromeo Field on June 1, 2019. Vincent Cabreza

BAGUIO CITY – Recognition rites for the Philippine Military Academy’s freshman class on Saturday (Mar. 14) will not be open to the public to prevent the spread of COVID-19 disease, the academy announced on Thursday (Mar. 12).

Only the closest relatives of fourth-class cadets will witness the ceremony where PMA Class of 2023 would be formally recognized as members of the Corps of Cadets by upperclassmen.

The late Cadet Fourth Class Darwin Dormitorio, who died in September last year following a series of maltreatment by older schoolmates, was a member of the class, which has taken the name “Madasigon.”

But all guests will be required to submit to thermal scans and medical examination, and would be barred from entering the academy should they display symptoms of the virus that has triggered a global pandemic, according to a PMA advisory. Visitors who have traveled to countries with confirmed COVID infections would also be asked to leave, in order to protect the cadets.

Family members have been asked to bring along their own handsanitizers and alcohol, and would be asked to exit PMA once the program concludes.

The ceremony requires a handshake between the fourthclass cadets and the first-class cadets (or the most senior cadets completing their last year at the academy), but all cadets would be wearing parade gloves as part of their uniforms.

PMA has been closed to visitors since February, after Baguio Mayor Benjamin Magalong canceled crowd-drawing activities as a precaution against the entry of the virus. As of March 10, no COVID cases have been reported in the city.