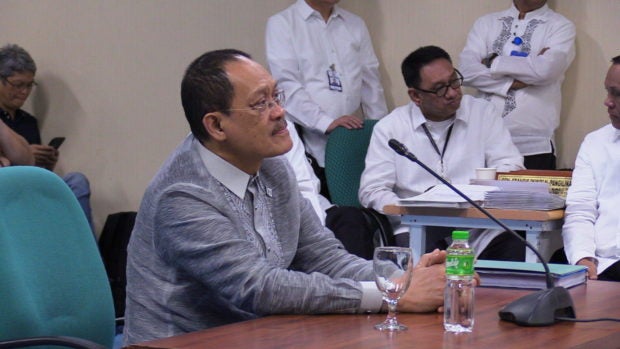 MANILA, Philippines — The powerful Commission on Appointments (CA) deferred the confirmation of Mohd. Noordin Pendosin Noor Lomondot as the Philippine ambassador to Kuwait.

During the hearing of the CA’s foreign affairs committee, Lomondot said his nomination as Ambassador Extraordinary and Plenipotentiary (AEP) to Kuwait “is an opportune time to upgrade our diplomatic status to ambassadorial level.”

“For almost two years now, we have no ambassador to Kuwait,” he said.

This to “fully restore the diplomatic relations and further strengthen the bilateral relations between the two countries to ensure a high standard of protection of the rights of the welfare of our more than 240,000 Filipino migrant workers and their families.”

Lomondot, who has been in the foreign service for 32 years, serves as the chargé d’affairs of the Philippine Embassy in Kuwait since May 2018.

He said he has been assigned in foreign posts in Iran, Libya, Saudi Arabia, Oman, Malaysia, Lebanon, Bangladesh.

“Under my watch, seven OFWs (overseas Filipino workers) facing the death sentence was spared from execution due to my exceptional report and strong representations with the host government,” he added.

However, after his opening statement, Senator Panfilo Lacson pointed out that Lomondot will reach his mandatory age of retirement less than a month from his potential confirmation on Wednesday.

Lacson, chair of the CA panel, said it would not be practical to confirm Lomondot as ambassador when he is set to retire in April.

“You are born on April 5, 1955 and if my mathematics is correct, you’ll be retiring on April 5 this year. So this may not be a disqualification but you know pragmatism dictates if you are confirmed today, it will take quite some time before you report to your post and you’ll be going there to just clear your table so to speak and come back because you will be compulsorily retired on April 5 of 2020,” Lacson said.

“If I may humbly suggest, baka pwedeng pag-retirin na lang siya sa [maybe we can just retire him on] April 5 and just give him a nomination, as a political appointee kasi kung iko-confirm natin siya, yung kanyang (because if we make the confirmation his) nomination as a career official and a little under one month from now you will be recalled having served as a career official and having reached your compulsory retirement age of 65 di ba?” Lacson said.

The CA panel hearing was suspended to give time to its members to discuss if they would defer the consideration of the confirmation of Lomondot as ambassador.

After the hearing resumed, the panel decided to defer Lomondot’s confirmation.

Lomondot then expressed hope that the Department of Foreign Affairs extend his service as foreign service officer class 1 for at least three to four months while he waits for his political appointment after he retires in April.

“So in that case, in the exigencies and continuity of service, I could still serve in Kuwait,” he added.