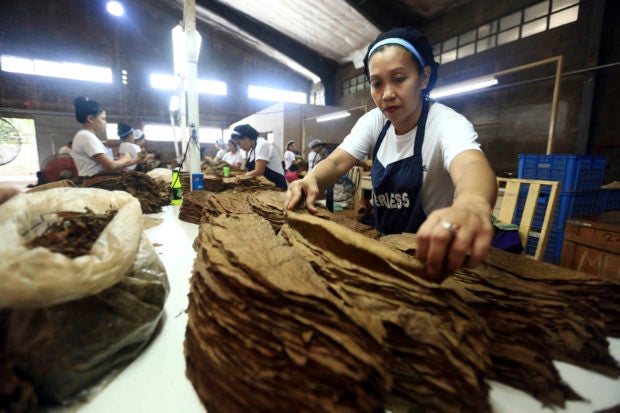 CIGAR FACTORY Women are behind work stations at a cigar factory in an economic zone in Carmona town, Cavite province. —EDWIN BACASMAS

In Laguna province, the Department of Labor and Employment (Dole) said it had also received reports that some electronic companies had cut down their manpower after the importation of raw materials from China, where the disease was first detected, “slowed down” due to travel bans.

Enforcing flexible work arrangements came following the surge of infections, 33 cases as of Tuesday, and the Philippines’ declaration of a public health emergency.

Although no factory has formally implemented the adjustments, Guido Recio, the Dole director in Laguna, said he had received “verbal” communication from “three to five” companies expressing their intent to do so.Laguna hosts more than 10,000 manufacturing plants, mostly in the electronics industry, with raw materials coming mostly from China or other Asian countries. Many are located inside economic zones in the province.

With or without the virus scare, the Dole clarified that companies might implement a flexible work schedule but “subject to an agreement [between the management and the] majority of the workers.”

“By majority, we don’t just mean 51 percent of the workforce but as much as 80 to 90 percent [of the employees],” Recio said in a telephone interview.

Recio said there was no need for the Dole to “approve or disapprove” such, but companies must submit in writing their decision “for information” of the labor office.

“We don’t recommend to companies [to implement adjustments] but at this point, we defer to the [measures] set by [the Department of Health],” he said.

No work, no pay

In Cavite province, where there are more factories but smaller in terms of production than those in Laguna, Joseph Gacosta, provincial labor chief, said “compressed work” is being implemented in some, not necessarily because of the outbreak but due to low production this month.

In cases when companies need to “reduce” the number of employees at a certain time due to importation restrictions, Recio said the management could ask employees to go on “forced leave” or use the time to hold employees’ training “so [the workers] still get paid.”