600 passengers disembark in Singapore from Costa Fortuna cruise ship, all found to be well 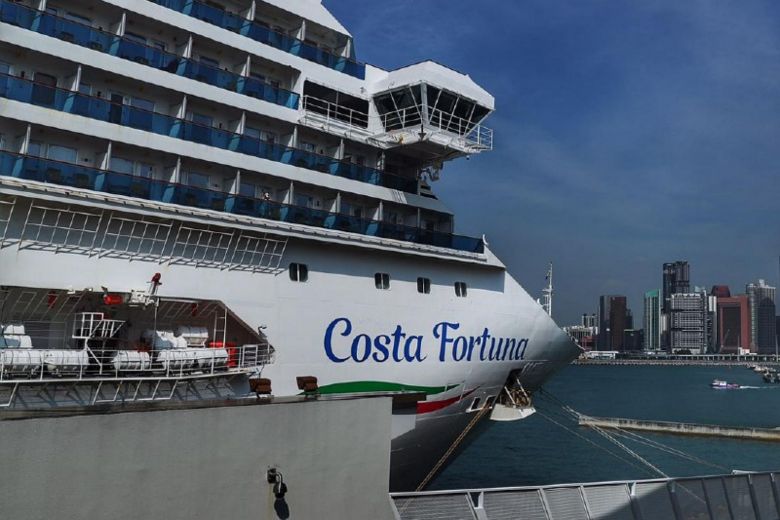 Costa Fortuna, which left Singapore on March 3, is the only cruise ship docking on March 10, 2020. ST PHOTO: KELVIN CHNG

SINGAPORE — More than 600 passengers disembarked from the Costa Fortuna cruise ship in three hours, as of noon on Tuesday (March 10), and all have been found to be well.

In addition, passengers who have been to areas hard hit by the coronavirus in the past 14 days have also been individually screened by doctors, and are certified fit to travel, the Ministry of Health (MOH), Singapore Tourism Board (STB) and Maritime and Port Authority of Singapore (MPA) said on Tuesday.

These passengers with recent travel history to affected areas are still staying on board the ship, and will later be taken directly to the airport for their flights.

The MOH, STB and MPA also said that Costa Fortuna had submitted its maritime declaration of health at 6am last Thursday, during which it declared that none of its passengers and crew were feverish or had symptoms of respiratory illness.

The penalty for a false declaration includes up to six months’ jail.

The authorities added that all passengers and crew had been checked by the ship doctor, and were subjected to further thermal and visual screenings by MOH-licensed healthcare providers.

“Passengers  have been bussed directly to the airport for their onward flights or to their hotels. Almost all foreign passengers will depart Singapore within the next two days,” said the MOH, STB and MPA.

On the passengers who had recent travel history to heavily affected areas such as northern Italy, the three agencies said: “These passengers had entered Singapore and boarded Costa Fortuna prior to the implementation of the travel ban and/or advisory on March 4, 2359 hrs.

“These passengers will stay on board the ship and will be facilitated directly to the airport for their onward flights.”

They did not specify how many of such passengers were on the cruise ship.

The Costa Fortuna docked at the Marina Bay Cruise Center at about 7:35 am on Tuesday, earlier than the scheduled timing of 9 am.

When The Straits Times arrived at about 7 am, there was already a pool of media personnel waiting outside the cruise centre for the ship’s arrival.

The arrival and departure halls were closed to the public. ST understands that Costa Fortuna is the only cruise ship docking on Tuesday.

Security officers at the entrance of the cruise centre prevented reporters from entering the compound.

The ship docked at around 7:35 am, but there was little activity except workers walking in and out of the ship via a link bridge to the terminal. Some passengers could be seen looking out of their balconies as the ship docked.

ST observed that the first group of passengers left the ship at about 8:40 am. They were then seen at the customs area about 15 minutes later.

The first group of passengers that left the terminal – about 20 people made up of foreigners, many middle-aged – were then escorted by officials to a waiting bus, which had the label “Orange K SQ978” on it.

By about 11:30 am, more than 400 people had left in about 20 buses, headed to Changi Airport and various hotels.

The passengers were of various nationalities, including French, Belgian, British, Austrian and German.

ST understands that there were 266 Germans on board the cruise ship.

Doctors licensed by the MOH will conduct enhanced, one-on-one checks on passengers with recent travel history to northern Italy in the last 14 days.

In a joint statement on Monday night, the MOH, MPA and STB also said that all remaining passengers will undergo temperature screening too, as a precautionary measure.

Those with fever or other symptoms of respiratory illness will be required to undergo a swab test.

“Passengers who are identified for Covid-19 swab testing but refuse to do so will not be allowed entry into Singapore,” the agencies said.

They added that the ship had not picked up any passengers since it left Singapore last Tuesday.

Earlier in the day, the MPA and STB said the ship had declared that none of its passengers currently on board was having a fever or had other symptoms of respiratory illness.

Costa Cruises, which operates the Costa Fortuna, told ST that all passengers on board are healthy and not showing any symptoms of the coronavirus.

The MOH, MPA and STB said that over the past two weeks, Singapore has handled more than 10 scheduled calls by cruise ships and disembarked over 5,000 passengers.

Singapore is a home port for the Costa Fortuna, and has received the ship 16 times since last December, the agencies said.

“Like all other cruise ships departing from Singapore’s cruise terminals, Costa Fortuna was disinfected prior to its departure from Singapore,” they added.

“All its passengers also completed pre-embarkation checks based on prevailing policies for travel history and temperature screening as required by the cruise line and the terminal operator prior to boarding.”

According to ship trackers, Costa Fortuna had been making steady progress in the direction of Singapore since Sunday. By 7 am on Monday, it was in the waters near Tuas but sailing in international waters.

According to  the ship’s itinerary, it left Singapore two weeks ago and travelled towards Koh Samui and Laem Chabang in Thailand, before heading to Sihanoukville in Cambodia.

Following that, it was scheduled to stop at Phuket, Penang and Port Klang, but was refused entry by both Thailand and Malaysia.

The Thai authorities had imposed restrictions “on Italians that have transited in Italy in the last 14 days”, Costa Cruises said on Twitter.

Malaysia has issued a blanket ban on all cruise ships because of the increasing Covid-19 cases. The Costa Fortuna is carrying about 60 Italians, according to Malaysian officials.

Singapore is listed among the ship’s home ports, which refers to a port where the vessel is based.

Costa Cruises also said on Monday that it will cancel the next cruise of Costa Fortuna, due to depart on Tuesday from Singapore.

It said: “The decision was deemed necessary on the basis of the restrictive measures currently applied by ports included in the ship’s itinerary.”

Mr Montee Miron, 68, flew into Singapore two days ago with his wife Delaine Pinedo, 64, expecting to go on the cruise tour on board the Costa Fortuna departing on Tuesday.

The 30-day cruise was scheduled to dock at various countries, including Malaysia, Thailand, Sri Lanka, India, Oman, Greece and, its final destination, Italy.

The couple, who are from Oklahoma in the United States, found out that their trip had been cancelled by the cruise company only after they came to the cruise centre on Tuesday morning.

Mr Miron, who is a retired investment banker, said: “It’s a long way to come for us to get here. We flew all the way from the States, and we didn’t find out (the cruise) was cancelled until this morning when we came here. Our travel agent — they didn’t even notify us.

He hopes that he will be reimbursed for his airfare for the one-way flight from Oklahoma to Singapore, which costs about US$650 (S$900) per person, as well as for the cruise tour itself, which costs almost US$6,000 for two of them.

The couple said they had been looking forward to the trip.

Ms Pinedo, a retired paralegal, said: “We find this disappointing because it’s been a long time since we travelled.”