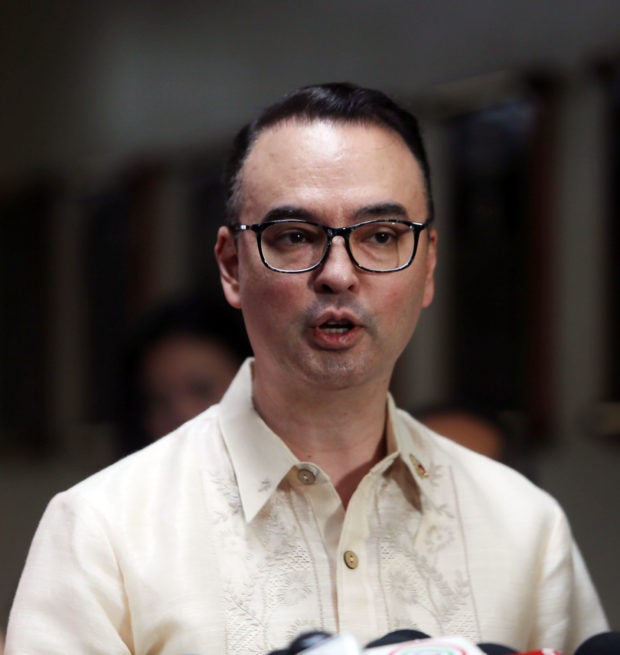 MANILA, Philippines — For House Speaker Alan Peter Cayetano, there is “no doubt” that the National Telecommunications Commission (NTC) will grant media giant ABS-CBN provisional authority to operate while its bid for franchise renewal remains pending in the House of Representatives.

Cayetano expressed his confidence on Tuesday following the first hearing of the House committee on legislative franchises on ABS-CBN’s franchise renewal.

In the said hearing, NTC Commissioner Gamaliel Cordoba said their office will “likely” issue a provisional authority to ABS-CBN following the Department of Justice’s (DOJ) advice to allow the media network to operate while its franchise renewal is pending in Congress.

This response from the NTC, Cayetano said, is the commission’s “polite way” of heeding to the orders of the House.

“Ang tingin ko hindi naman maganda kasi na ang [I think it is not good that the] executive will be taking orders from the legislative. So, I think it is the polite way of NTC to say, ‘yes sir,'” Cayetano said in a press briefing.

“I have no doubt that they will allow ABS to continue broadcasting, subject to the same conditions found in your existing franchise and to NTC regulation. But kung everytime na lang na may hearing dito at order-an ng Congress e sasabihin nila yes, baka ma-blur ang lines between the executive and the legislative,” he added.

(But if every time we have a hearing here and the Congress will order them and they will say yes, the lines between the executive and the legislative may be blurred.)

To recall, Cayetano and committee chair Palawan Rep. Franz Alvarez earlier sent a letter to the NTC enjoining the latter to grant media giant ABS-CBN provisional authority to operate, effective on May 4, 2020 “until such time that the House of Representatives/Congress has made a decision on its application.”

Cayetano justified House’s jurisdiction to make such orders to the NTC.

(Let’s apply logic here. Let’s not say who attended law school and who did not. If the House has the power to grant a 25-year franchise, why would we not have the power to tell the NTC not to turn off the lights on ABS-CBN while we decide?)

“If you have the greater power then naturally you have that auxiliary powers to enforce that,” he added.

Following the mindset of “innocent until proven guilty,” Cayetano said that as far as the lower chamber is concerned, ABS-CBN has no violations yet of its franchise.

Further, the House Speaker said the committee on legislative franchises has yet to deny the franchise renewal bid of ABS-CBN, thus there is no reason to shut them down once their current franchise expires on May 4.

“There’s no reason in this world why the NTC or any other agency of government should shut them down or prohibit them from broadcasting while their franchise is pending before the committee,” Cayetano said.

Currently, there are 11 bills pending before the House committee on legislative franchises seeking to renew the franchise of ABS-CBN for another 25 years.