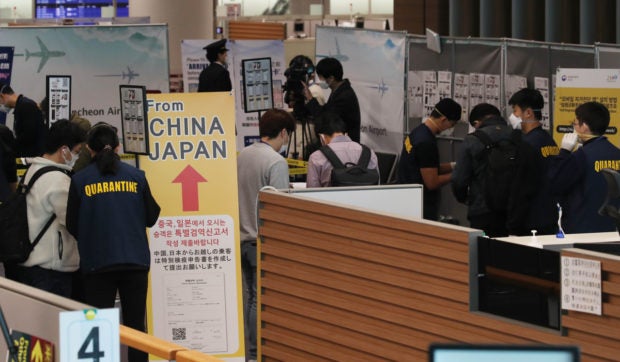 Passengers arriving from Japan are required to go through a special quarantine procedures starting Monday. (Yonhap) via The Korea Herald

Both countries suspended their 90-day visa waiver programs for each other, while deciding to invalidate visas already issued. Meanwhile, Japan mandates all visitors from Korea to go into quarantine for two weeks upon arrival. Seoul is also enforcing special entry procedures, including temperature checks and health examinations.

Flights between both countries have been mostly halted. Flag carrier Korean Air suspended flights on 16 of its 17 routes to Japan, leaving only Incheon-Narita route intact. Asiana Airlines suspended flights on all Japanese routes, the first time in 30 years. Budget carriers have also decided to suspend their flights to Japan.

The curbs that were announced last week, first by Japan and then Korea, are expected to deal another blow to bilateral ties between Seoul and Tokyo, which hit a recent rock bottom last year, due to differences over wartime history and trade issues.

Seoul and Tokyo are set to hold their first trade meeting in around three months on Tuesday, but observers speculate they are less likely to make progress to normalize the strained relations, due to the latest tit-for-tat responses on containing the COVID-19 outbreak.

The trade feud dates back to July last year when Japan tightened export controls of key chemicals for semiconductors to Korea. Seoul views the decision as an apparent retaliation over Korea’s Supreme Court ruling, which enforces Japanese firms to compensate for its use of Korean workers during World War II. Japan hasn’t entirely lifted its export controls since then.

While there were some signs of thawing relations as Korean President Moon Jae-in and Japanese Prime Minister Shinzo Abe met in December for the first time in 15 months and agreed to maintain dialogue, no breakthrough has been made so far.

On Monday, South Korea stood at 7,478 confirmed cases of COVID-19, with 53 deaths. For Japan, the number was around 1,200 cases, including nearly 700 from a cruise ship, but it could be much higher than reported, due to limited testing.

Korea tests more than 10,000 cases a day, while Japan tests about 500, according to Seoul officials.

Japan’s Foreign Ministry said that the entry restrictions were a “scientific” decision based on quarantine protocol, and are to last until the end of the month.

Seoul asserts its travel restriction is based on what it calls the “principle of reciprocity.”

“I believe our countermeasure was controlled — putting our nationals’ health and safety first — and based on transparency, openness and democratic procedures,” a senior Foreign Ministry official said on condition of anonymity.