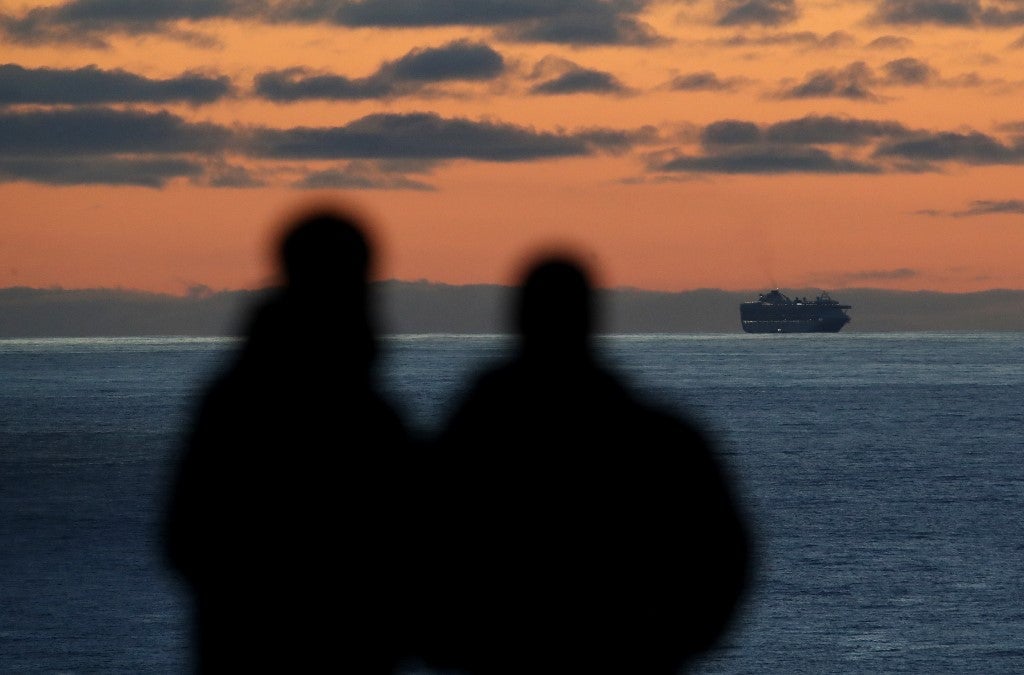 The Princess Cruises Grand Princess cruise ship sits off the coast of San Francisco as it takes on supplies on March 07, 2020 in San Francisco, California. Justin Sullivan/Getty Images/AFP

LOS ANGELES, United States — A US cruise ship hit by coronavirus was given permission to dock late Saturday, while New York announced a state of emergency as confirmed cases across the country surged past 400.

The fast-spreading virus has already spread to 30 US states, killing at least 19 people, while the American capital announced its first case Saturday and citizens were coming to terms with public events being canceled across the country.

The Grand Princess cruise ship has recorded 21 COVID-19 infections on board — 19 crew and two American passengers — out of 45 people tested.

Authorities ordered the vessel to remain at sea off the coast of San Francisco, where it was due to dock Saturday following a 14-day trip to Hawaii, after it emerged that a passenger on a previous voyage had contracted the virus and later died.

The vessel will instead go to nearby Oakland on Monday and begin disembarking passengers in need of “acute medical treatment,” vessel owner Princess Cruises said in a statement.

The ship’s crew will be quarantined and treated aboard the ship, the company added.

Around half of the vessel’s 1,100 crew hail from the Philippines and several are among those diagnosed with the virus, according to Princes Cruises.

Vice President Mike Pence, who is managing the US government’s response to the COVID-19 outbreak, said earlier that all 3,533 passengers and crew would be tested for coronavirus and quarantined if necessary.

Further south in Los Angeles, passengers aboard another cruise ship were told they must remain on the vessel overnight.

The order came after a woman was taken off the Carnival Panorama cruise ship to be tested for the virus, the Long Beach Post reported.

Nationwide, more than 400 people have contracted the virus so far, with dozens of new cases emerging daily.

New York became the latest state to declare an emergency as the number of patients there rose to 89, including a driver who apparently worked for ride-sharing company Uber.

The announcement came as the first US service member stationed at home tested positive.

Maryland officials also reported that two people who were at the recent Conservative Political Action Conference attended by Pence and President Donald Trump had tested positive for the virus.

Starbucks reported that one of its employees in downtown Seattle had tested positive, and the store shut for cleaning.

Asked whether he was worried about the virus getting closer to the White House, Trump said he was “not concerned at all.”

He also said he did not plan to cut his public engagements.

“We’ll hold tremendous rallies,” said Trump before hosting a dinner in Florida for the president of Brazil.

Public events have been canceled across the US in an effort to contain the epidemic.

The fate of the Grand Princess is reminiscent of the Diamond Princess, a sister vessel that suffered its own coronavirus outbreak while moored off the coast of Japan.

Carolyn Wright, 63, a passenger on the Grand Princess, told AFP that there had been growing concern and frustration aboard the vessel.

“I’m really happy there’s finally a plan, I just wish we knew more as to what’s going to happen to us,” she said.

Fellow passenger Kari Kolstoe, 60, told CNN she had stage 4 cancer and was worried she wouldn’t make it home in time to start chemotherapy treatment on Monday.

“I’m in extremely delicate health right now,” Kolstoe, who is traveling with her husband, told the outlet.

“If I don’t have the coronavirus, I need to get that found out sooner rather than later.”

The number of worldwide coronavirus cases exceeds 100,000 and the overall death toll is more than 3,500 across 95 nations and territories, according to the latest count by AFP.