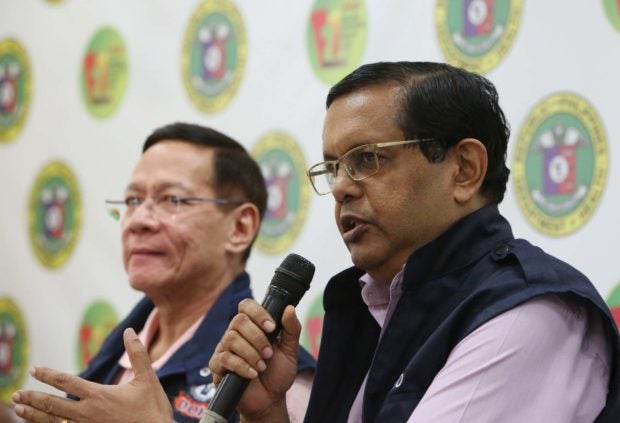 MANILA, Philippines — President Rodrigo Duterte will declare a state of public health emergency after the Department of Health (DOH) confirmed the local transmission of the virus that causes the COVID-19 acute respiratory disease, presidential spokesperson Salvador Panelo said on Saturday.

Health Secretary Francisco Duque III recommended the measure after health authorities said that another Filipino, the third in the country, was found positive for COVID-19, bringing to six the total number of confirmed cases in the Philippines.

The President agreed to the recommendation to help authorities better respond to the COVID 19 cases in the country, according to Panelo.

With the confirmation of local transmission, Duque said he has raised the DOH’s alert level to “Red Sublevel 1.”

“The said proposal has been raised to the attention of the President who has agreed to issue such declaration after considering all critical factors with the aim of safeguarding the health of the Filipino public,” Panelo said in a statement.

He did not say when it might be declared by the President.

The declaration, Duque said, would help ease the procurement of critical logistics and supplies, as well as ensure that reporting of cases would intensify.

“This is a preemptive call to ensure that national and local governments and public and private health care providers can prepare for the possible increase in suspected and confirmed cases,” Duque said at a press briefing.

The declaration will prompt all concerned agencies, local governments and health care providers to implement response measures, he added.

The DOH said it had recorded six confirmed COVID-19 cases in the Philippines as of Saturday.

The latest case is the 59-year-old wife of a 62-year-old diabetic who had not traveled to any of the 88 countries where the SARS-CoV-2 virus has been spreading.

The man, a resident of Cainta town in Rizal province, was brought to Cardinal Santos Medical Center on Sunday with severe pneumonia.

He was diagnosed with COVID-19 on Thursday and was in “guarded condition” but with an acute kidney injury on Saturday, according to Celia Carlos, director of the Regional Institute for Tropical Medicine (RITM).

His wife and constant companion was confirmed to have been infected on Saturday and was in stable condition.

The second Filipino found to have also been infected is a 48-year-old lawyer who had returned from a trip to Japan on Feb. 25. He was confirmed to have the virus also on Thursday and was moved from St. Luke’s Global in Taguig City to the RITM where he is in stable condition.

Nearly a month ago, the Philippines detected the virus in three Chinese tourists, all of them from Wuhan city in central China, the epicenter of the outbreak. One of the tourists died of pneumonia and the two others have recovered and have flown home.

The consultancy company, Deloitte Philippines, which is based in Bonifacio Global City in Taguig, admitted that one of their employees was one of the new confirmed COVID-19 cases.

Both the DOH and Taguig City Mayor Lino Cayetano said in separate statements that the lawyer was the Deloitte employee.

In a statement, the company said it was supporting him and his family “in every way we can.”

He said the city government has coordinated with the local communities and business groups to strengthen prevention and monitoring measures.

Duque said the authorities were “exhausting all efforts” to trace all those who may have come in contact with the three confirmed Filipino cases, as well as the three more foreigners (a Taiwanese, a Japanese and an Australian) who were confirmed to have contracted the virus after visiting the Philippines recently.

Contact tracing would ensure that the localized transmission of the virus would not become a community-wide infection.

Duque said the authorities were trying to contact passengers on the same plane in which the lawyer had flown home on Feb. 25, Philippine Airlines flight PR421 from Haneda, Japan.

Being traced, too, are the worshipers at the San Juan prayer hall, Greenhills Masjid, which the Cainta couple often visited, he said.

“Local transmission, if and when it happens in the country, would thus be unequivocally reported to the people,” he said.

Panelo called on the public to be calm and sober about the disease and should be “scrupulous in reading informative materials” and not share unverified and unofficial information that could cause panic.

In a text message, Sen. Joel Villanueva warned the DOH not to engage in any cover-ups.

“Our country already suffers from the malady of misinformation long before this disease began,” he said.

Sen. Panfilo Lacson asked whether the Philippines had enough test kits for COVID-19 to cover a decent portion of the population.

“This is a top health priority, and government must invest heavily not only on prevention and cure by way of research, but also on containment. We have many homegrown medical experts in and out of government,” he said.

Rabindra Abeyasinghe, country representative of the World Health Organization (WHO), said there was a “huge global demand” for COVID-19 testing kits, but assured the Philippines that it would do its best to ensure the country “won’t run short of [its] requirement.”

The RITM reported it had 2,500 test kits in stock, which was boosted this week with an additional 5,000 from the WHO.

The WHO data show that of all the recorded cases of COVID-19, the bulk, or 81 percent, are mild; 14 percent progress to a severe degree; 5 percent become critical.

Assistant Health Secretary Maria Rosario Vergeire said that despite the health emergency, not everyone with fever, cough or sore throat would be tested for COVID-19.

To be tested, Vergeire said one should have traveled recently to countries with known infections; show flu-like symptoms; or likely to have been exposed or had direct contact with any of the confirmed cases.

“We urge you to still be rational and not demand that every single respiratory tract infection that anybody contracts needs to be checked for COVID-19. That is not a possibility for any country,” he said.

Duque said he disagreed with any class suspension at this time, as had been declared by the Navotas city government.

“That’s their decision. But as of today, we are on Sublevel 1 of Code Red and that is not being recommended. It is not right for now. There will be triggers that will make the DOH recommend that, as part of Sublevel 2 of Code Red,” he said.

A Sublevel 2 alert means there are “unrelated, unlinkable clusters of cases in different places and simultaneous transmissions are going on,” Duque said.

“Once there is sustained community transmission, the strategy will be shifted from an intensive contact tracing to the implementation of community-level quarantine (or lockdown), and/or possibly, suspension of work or school. These will be implemented in municipal, city or provincial scale as may be warranted. Augmentation of health staff from unaffected areas and uniformed personnel will also be facilitated,” he said.

In addition to the RITM, the DOH and the WHO are improving the capacity of five other government hospitals to test and handle any possible influx of suspected COVID-19 patients.

—With a report from Leila B. Salaverria and Krixia Subingsubing