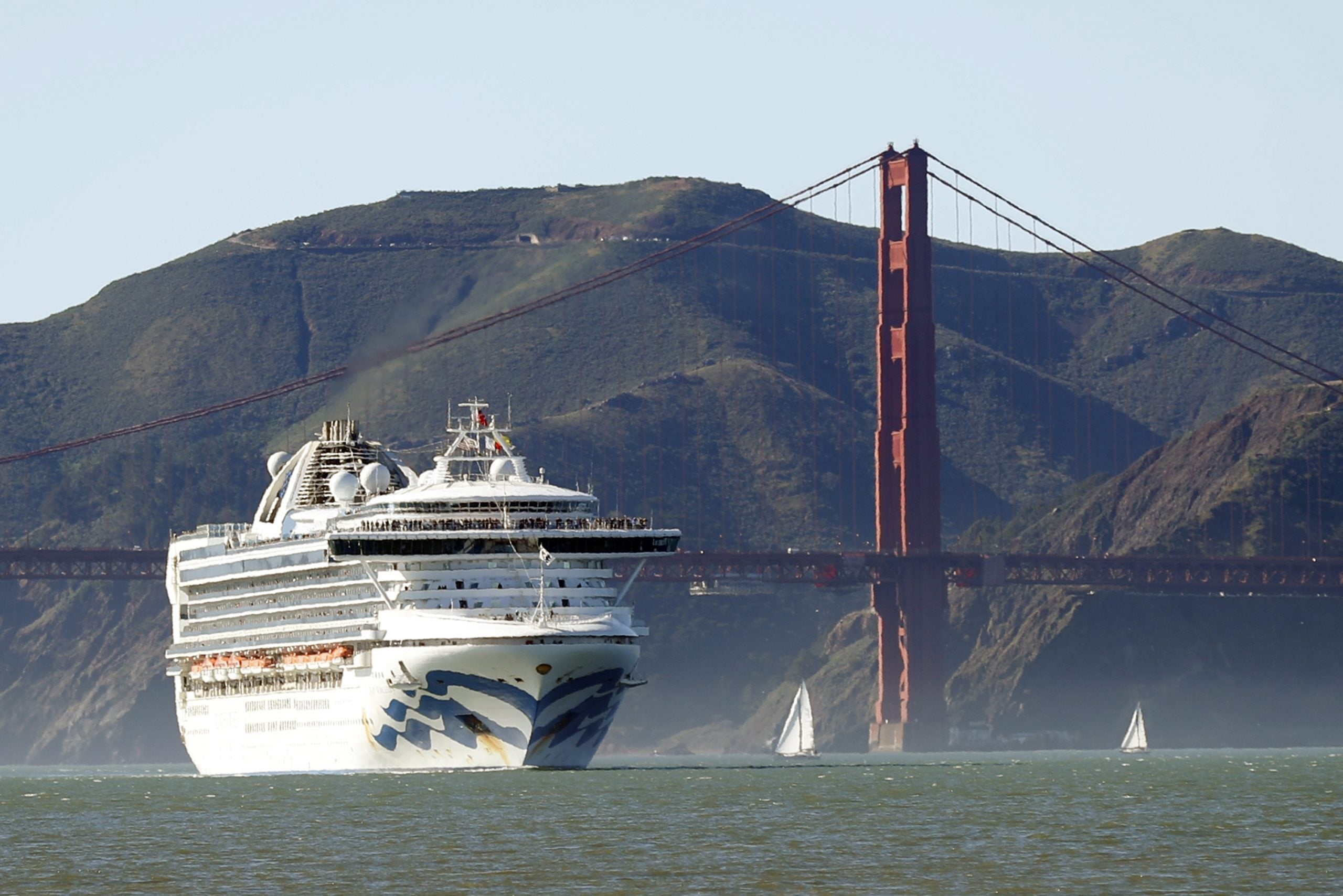 KEPT OFFSHORE In this Feb. 11 photo, the Grand Princess cruise ship passes the Golden Gate Bridge as it arrives in San Francisco from Hawaii. California’s first coronavirus fatality is an elderly patient who apparently contracted the illness on a cruise, authorities said on Wednesday. —AP

LOS ANGELES — California declared a state of emergency over the new coronavirus on Wednesday as a cruise ship was held off the coast over fears of a new outbreak.

The measures came as the death toll in the United States hit 11, including the first fatality in California, and lawmakers in Congress agreed to provide more than $8 billion to fight the rapidly spreading disease.

California Gov. Gavin Newsom announced the emergency measures as he reported the death of an elderly person who had taken a cruise to Mexico.

“The State of California is deploying every level of government to help identify cases and slow the spread of this coronavirus,” Newsom told reporters.

The emergency proclamation would help the state prepare “in the event it spreads more broadly,” he said.

Thousands traveling aboard the Grand Princess, the same cruise ship on which California’s first victim was thought to have contracted the virus, were held offshore Wednesday night.

The ship cut short its current voyage back from Hawaii after passengers and crew members developed symptoms. But its planned return to San Francisco was held up in order to carry out testing on board for those potentially infected.

“We’re holding that ship, which (has) thousands of passengers as well, off the coast, and we’ll be conducting those tests,” Newsom told a press conference.

Eleven passengers and 10 crew members were potentially infected with the virus, he said.

Sixty-two guests who remained on board from the earlier Mexico voyage were being restricted to their cabins for testing, the Princess Cruises company said in a statement to Agence France-Presse (AFP).

“In an abundance of caution, these guests and other potential close crew contacts have been asked to remain in their staterooms until screened by our on-board medical team,” it said.

In total some 2,500 passengers plus crew typically up to 1,150 were on board for its Mexico voyage, Newsom said.

The Grand Princess belongs to Princess Cruises, the same company that operated the coronavirus-stricken ship held off Japan last month, on which more than 700 people on board tested positive.

The new coronavirus emerged from China last December and has spread to more than 80 countries.

Mainland China reported a rise in new confirmed cases on Thursday, reversing three straight days of declines, because of a spike in new infections in Wuhan, the city at the center of the outbreak.

Mainland China had 139 new confirmed cases as of Wednesday, the National Health Commission (NHC) said, bringing the total accumulated number of cases to 80,409.

Authorities reported 119 new cases the previous day and 125 the day before that. The increase was driven by more cases in Wuhan, capital of the central Chinese province of Hubei.

Wuhan’s new infections climbed to 131 from 114 a day earlier. There was no immediate elaboration from the NHC.

The death toll from the outbreak in mainland China had reached 3,012 as of Wednesday, up by 31 from the previous day. Hubei accounted for all the new deaths. In Wuhan, 23 people died.

‘Necessary protections’Earlier on Wednesday, health officials in the US state of Washington said a 10th patient had died there.

One of the Los Angeles cases concerns a medical screener at the city’s international airport checking overseas travelers for symptoms. The Department of Homeland Security said the worker was under self-quarantine at home along with family members and was showing mild symptoms.

“DHS is happy to report that this individual was highly trained and did everything right both on the job and when they began to feel sick,” a statement said.

“We are told the individual wore all the correct protective equipment and took necessary protections on the job.”

Nationwide, more than 130 people have been infected, with the virus detected in more than a dozen states.

Speaker Nancy Pelosi said Republicans and Democrats had reached a deal to fund the response to the outbreak to the tune of $8.3 billion.

The House of Representatives passed the measure, and the Senate was to vote on Thursday.

Vice President Mike Pence, the White House’s point man on the crisis, told reporters that he would be traveling to Minnesota on Thursday to visit a plant manufacturing personal protective equipment, including masks.

He will then visit Washington state and meet with Gov. Jay Inslee to review containment efforts in the Seattle area.

All of the newly infected individuals in Los Angeles were exposed to the coronavirus through close contact, health officials said.

Barbara Ferrer, director of the Los Angeles County Department of Public Health, said three of the cases concerned travelers who had gone together to northern Italy, a virus hot spot with more than 100 deaths.

Two other cases involved individuals who had come in contact with a family member who had the virus and the last was the airport screener.

“The step we’re taking today is about preparation, not panic,” said Mayor Eric Garcetti of the emergency declaration.

Officials said they expected the number of infections in California to rise in the coming days and urged families to brace for possible school closures and the cancellation of public events.