Cory Aquino, Maria Ressa among Time’s 100 Women of the Year 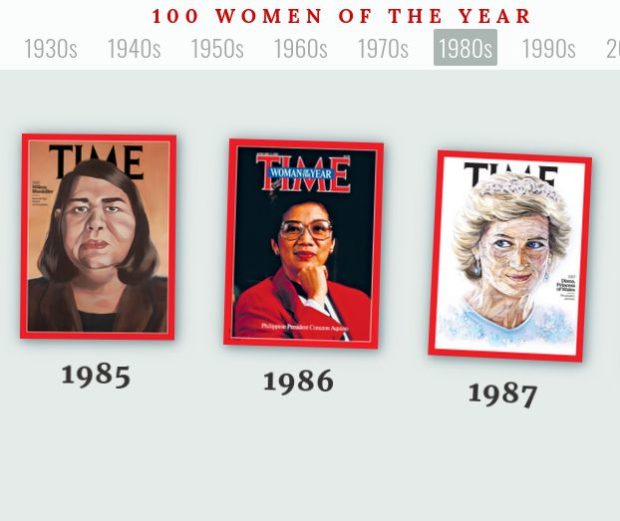 Cory Aquino in Time’s special issue of 100 Women of the Year. PHOTO/Screenshot from Time Magazine website

MANILA, Philippines – The late former Philippine President Corazon “Cory” Aquino and Rappler’s Maria Ressa were among “the influential women” honored by Time Magazine in its 100 Women of the Year special issue this March.

“For 72 years, Time named a Man of the Year. With a few exceptions, it was almost always a man, usually a President or a Prime Minister or perhaps a titan of industry. Throughout history, these are the kinds of men who have wielded influence over the world,” the magazine said in its introduction of the 100 Women of the Year project.

The magazine changed the title in 1999 from Man of the Year to Person of the Year, noting that “while the name rightly changed, too often the choice was the same.”

Cory Aquino was named Time’s Person of the Year in 1986 for defending democracy at the height of the Marcos regime that was eventually overthrown by people power in February 1986 and Ressa in 2018 for being among “The Guardians.”

(Time cited four figures called “The Guardians.” Besides Ressa, they were slain Saudi columnist Jamal Khashoggi, the staff of the Capital Gazette in Annapolis, Maryland, where five people were shot to death in June;  and Reuters reporters Wa Lone and Kyaw Soe Oo, who have been jailed in Myanmar for a year. Time said that 2018 has been marked by manipulation and abuse of information, along with efforts by governments to foment mistrust of the facts.) 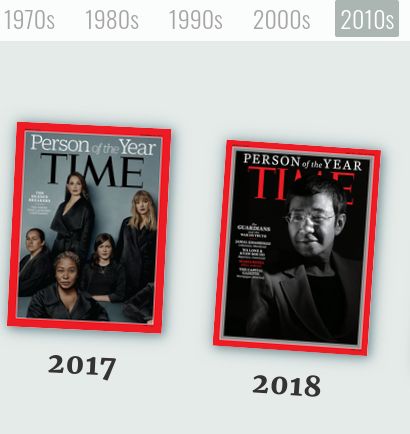 Maria Ressa in Time’s special issue of 100 Women of the Year. PHOTO/Screenshot from Time Magazine website

“With this 100 Women of the Year project, we’re spotlighting influential women who were often overshadowed,” Time explained.

“This includes women who occupied positions from which the men were often chosen, like world leaders Golda Meir and Corazon Aquino, but far more who found their influence through activism or culture,” the magazine added.

Time said it designed 89 new TIME covers but did not change the 11 covers for women who had been named Person of the Year.

“The 100 choices in this project are the result of a months-long process that began with more than 600 nominations submitted by TIME staff; experts in the field; our creative partner, filmmaker Alma Har’el; and a committee of notable women from various backgrounds,” Time said.