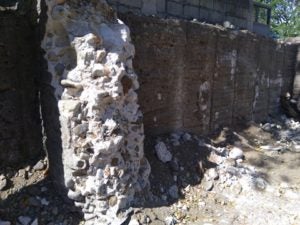 ANCIENT WALL A section of the Commandancia ruins in Bongabon, Nueva Ecija, has been torn down to give way to an apartment building. ARMAND GALANG

BONGABON, NUEVA ECIJA—The town government has stopped the demolition of an old structure believed to be part of the Spanish Commandancia of Nueva Ecija built in 1700s and which served as the political headquarters of the province.

The structure’s ruins are situated on a 334-square-meter lot across the old municipal hall on Rizal Street and the public plaza on Mozo Street here.

Its section on Rizal Street had been torn down to give way to an apartment building, according to heritage advocates, who called the move “unfortunate.”

But municipal engineer Ferdinand Arucan said his office had not received any document or declaration that the lot, owned by Bartolome Valderama, was a heritage site. Arucan said they were also unaware that it had already been demolished.

Reacting to the claims of heritage advocates, Valderama said his lot was different from the much bigger property reportedly owned by a certain Doctor Santos on Mozo and F. Aquino streets.

Santos’ property, he said, is where the local government and the Catholic Church’s St. Francis of Assisi parish put up a marker in 2012.

Part of the marker read: “This monument attests to the existence of the Spanish Commandancia of Nueva Ecija in 1700s marking the antiquity of the town of Bongabon, Province of Nueva Ecija, the memory of which shall remain an esteemed symbol of historical and cultural significance and contribute to the positive development of national pride.”

Valderama said his parents had never told him of any historical significance of their property, adding that theirs was only a warehouse for the family’s rice harvest.

“Had I known or been told it is a heritage site, then I would not have touched it,” said Valderama, who planned to put up a commercial building on the lot. —ARMAND GALANG