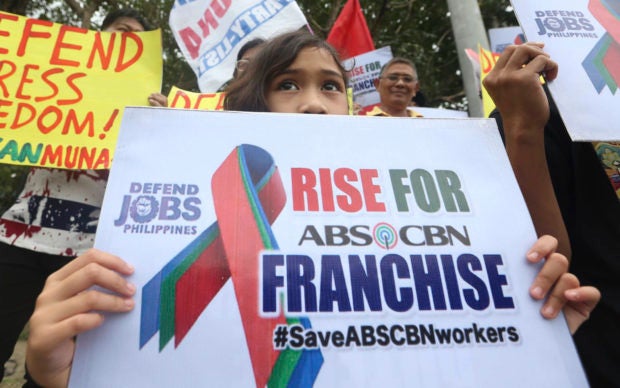 ‘DEFEND JOBS’ Militant organizations, including the feminist group Gabriela, join calls for the renewal of the ABS-CBN franchise and the dismissal of the quo warranto petition filed against the network by Solicitor General Jose Calida, in a rally outside the Supreme Court compound in Manila on Wednesday.—MARIANNE BERMUDEZ

MANILA, Philippines — Bowing to public pressure, the House leadership on Wednesday announced that it would take up the 11 bills renewing ABS-CBN’s franchise on March 10, a day before Congress adjourns for Lent, in a hearing meant to guarantee that the giant media network would not go off the air after the expiration of its license.

Speaker Alan Peter Cayetano said the House committee on legislative franchises would formally give “instructions” to the National Telecommunications Commission (NTC) to grant ABS-CBN a provisional authority to continue operating after its license expires on May 4.

At a hastily called news conference in his office, Cayetano said the committee, chaired by Palawan Rep. Franz Alvarez, would “make it clear” to the NTC that it had officially taken up the renewal of ABS-CBN’s license.

“So it should not switch the lights off [on ABS-CBN], so to speak, and they (NTC officials) should grant the provisional authority,” the Taguig lawmaker said.

Congress has no control over the commission, an executive office under the Department of Information and Communications Technology. Alvarez, however, said his panel expected the NTC to grant the provisional authority to ABS-CBN, considering a number of precedents.

The provisional authority should be valid “while the bills are still pending,” Alvarez said. “So the life span is until the end of 18th Congress. So that’s about two years, but it may be acted upon in less than two years.”

Critics, including Albay Rep. Edcel Lagman and Buhay Rep. Lito Atienza, had earlier questioned the validity of a provisional authority, arguing that despite the precedence, there was no legal basis for it and that no less than the grant of a congressional franchise was necessary to keep ABS-CBN on the air.

Cayetano made the announcement of the committee hearing following an outpouring of support for the broadcaster and public outcry against the nonrenewal of the network’s franchise as an attack on press freedom, even as rumors of an ouster plot against the Speaker by a “silent majority” circulated in the 302-member chamber.

None of ABS-CBN’s officers, including its president and CEO Carlo Katigbak, who appeared at a Senate hearing to defend the renewal of its franchise, have been invited to the hearing, which would focus on the NTC’s role.

Congress is expected to adjourn on March 11 and resume sessions on May 4, which coincides with the end of ABS-CBN’s 25-year franchise.

A House resolution urging the franchises committee to immediately tackle the network’s license renewal has garnered 91 signatures, according to Lagman, its proponent.

Atienza claimed that most of the House members supported the renewal of ABS-CBN’s franchise but were keeping quiet out of fear of reprisal.

Cayetano, however, said the House leadership “did not change our mind” about the issue being not as urgent as other proposed legislation.

He had said the franchise renewal bills would likely be discussed only after Congress resumed sessions in May.

“No. 1: To reannounce to the pros and antis to submit their position papers. No. 2: To make it clear to the NTC that the committee has officially taken up [ABS-CBN’s franchise] … And No. 3: To set the ground rules,” he said.

Cayetano said it was important to set the ground rules to prevent the hearing from turning into a “circus.”

“We don’t want the hearing to become a bull session, which means all those against ABS-CBN would gang up on them. We also don’t want it to be a flattery forum, in which all those in favor would only say one thing. We want to define the issues,” he said.

The House plan to instruct the NTC to grant a provisional authority to the radio and television giant got a boost when senators on Wednesday unanimously approved a resolution “expressing the sense” of the Senate supporting ABS-CBN’s operation until the end of the 18th Congress in June 2022.

Senate Resolution No. 6, filed by Senate Minority Leader Franklin Drilon, consolidated three other similar resolutions urging the NTC to issue a provisional authority to the network.

Drilon noted that Justice Secretary Menardo Guevarra suggested during a Senate hearing last week that Congress should ask the NTC to grant the provisional authority.

Senate President Vicente Sotto III said that while he agreed that ABS-CBN should be given a franchise extension, it seemed the NTC wanted “another head on the chopping block instead of theirs.”

“With that, I would like to register my vote as a ‘critical yes,’” Sotto said. —WITH A REPORT FROM MARLON RAMOS