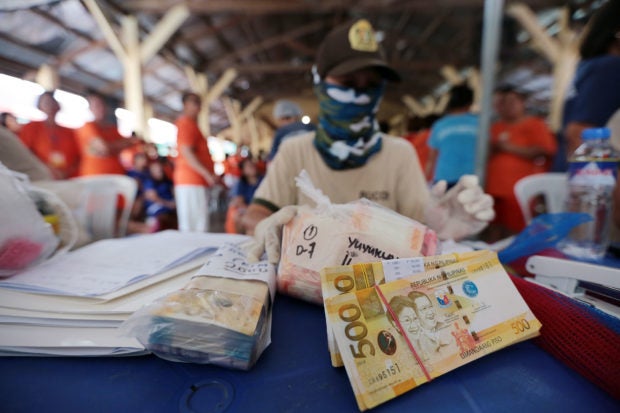 MANILA, Philippines — Jail personnel on Wednesday seized bundles of peso bills amounting to P250,000, illegal drugs, and other contraband items during a raid on the Correctional Institution for Women (CIW) in Mandaluyong City.

Of the cash, P100,000 was traced to high-profile inmate Yu Yuk Lai, who is serving a maximum 40 years in prison for drug trafficking. She told the raiders the money did not come from drug trade.

Personnel of the Bureau of Corrections and Bureau of Jail Management and Penology also confiscated a still undetermined amount of cash from the dormitory of plunder convict Janet Lim Napoles during the “Oplan Greyhound.”

Director General Gerald Bantag, BuCor chief, said they would investigate how such a huge sum of money entered the CIW, which houses more than 3,000 inmates.

Each inmate is allowed to bring in only P2,000 and any excess should be deposited with BuCor personnel, he said.

Besides cash, prison guards also seized five sachets of suspected “shabu” (crystal meth), kitchen knives, gaming consoles, solar batteries and pieces of jewelry — an item that can start fights especially if these are stolen inside the jail.

Bantag said the inmates found with contraband in their possession faced disciplinary actions and temporary suspension of visiting privileges.

Officials had claimed the 74-year-old Yu managed to slip in cash, gadgets and even drugs in cahoots with prison officials.

In November last year, Yu surrendered appliances and a phone mainly used for calling, which she claimed she bought from a BuCor employee.

Also in the same month, the Philippine Drug Enforcement Agency seized more than P5 million worth of shabu and electronic gadgets from Yu and other convicts inside the CIW.