Cayetano to Velasco: Promise not to remove any House leaders and we'll shut up | Inquirer News
Close
menu
search

Cayetano to Velasco: Promise not to remove any House leaders and we’ll shut up 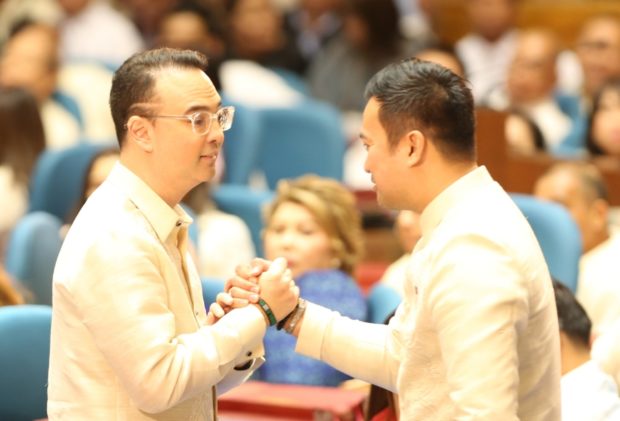 MANILA, Philippines — House Speaker Alan Peter Cayetano posed a dare to Marinduque Rep. Lord Allan Velasco: “Promise not to remove any House leaders and we will shut up,” as word war continues amid talks of an alleged coup gripping the lower chamber.

During a press briefing in Quezon City, Cayetano said that there is no need for him and Velasco to talk after the House Speaker claimed that the Marinduque lawmaker is behind a plot to oust him as the leader of the lower chamber.

In an earlier interview, Cayetano claimed that Velasco was promising chairmanship and budget allocation to some members of the lower chamber.

This development came as clock continues to tick before Velasco takes over as House Speaker following a term-sharing deal between the two lawmakers.

(My challenge to him, if he really wants to talk because it was repeatedly said that he is willing to sign… my challenge is that he makes a categorical statement that if he becomes Speaker, you will not remove any officers, leadership and chairperson.)

(If he would say that then we will shut up. But if he doesn’t and he goes around promising chairmanship, he is the one creating us instability.)

Cayetano said making this pronouncement should be easy if Velasco means it.

(But promises had already been given. So, he may need to gather and meet those people he had given promises and tell them sorry but there had been changes.)

Cayetano also did not mince his words in calling Velasco “fake,” saying that the Marinduque lawmaker greets him but talks negatively of him behind his back.

“I’ve never closed the door to him but ayoko ng plastik, ayoko ng pag kaharap ako, ‘ok boss sir, speaker’ tapos pagtalikod, sisiraan kami and ako, I don’t care about what will happen. I can take care of myself,” Cayetano said.

In July 2019, President Rodrigo Duterte said Cayetano would serve as House Speaker in the first 15 months of the 18th Congress while Velasco will succeed to serve for the remaining 21 months under a term-sharing agreement.

“After I leave this office, may konting sadness but I just want to feel fulfilled na nagawa ko yung kaya ko [I have accomplished what I am capable of doing],” Cayetano said.

“Pero I will be very angry including at myself if mapapalitan yung mga chairmans dahil yun ang sapan namin ni Cong. Velasco na I included his people and expanded the leadership para nga one 18th congress na lang tayo,” he added.

(But I will be very angry including at myself if chairmans are replaced because that is part of what me and Cong. Velasco have agreed upon that I include his people and expanded the leadership so we will be one in the 18th Congress.)

In his latest encounter with reporters, Velasco refused to make any comment on the issue, saying this is not the “right time” to talk about it.

But Velasco, in an earlier statement, has denied the said ouster plot, calling the allegations “baseless.”