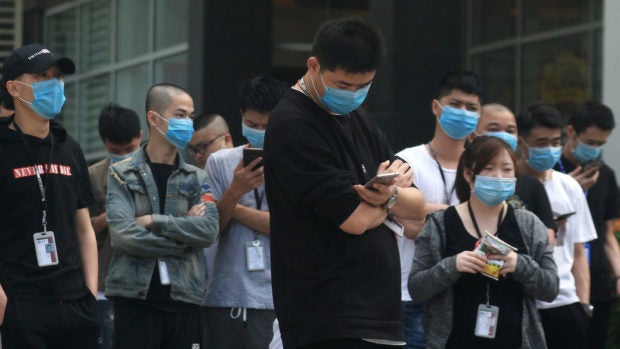 SENT HOME The Philippine Amusement and Gaming Corp. says at least 2,000 of 70,000 Chinese citizens illegally working for Philippine offshore gaming operators (POGOs) and other fraudulent online activities have been sent back to China since January. Chinese POGO workers, like this group waiting for a ride in Pasay City, are coming under scrutiny following exposés that many have bribed corrupt immigration officers to get into the country. Philippine Daily Inquirer file/RICHARD A. REYES

Presidential spokesperson Salvador Panelo likened the situation to when the President ordered the suspension of gaming operations amid corruption allegations within the Philippine Charity Sweepstakes Office (PCSO).

(The President, if you remember, has suspended the operations of lotteries when he received certain complaints of anomalies? That’s the same. If there would be more complaints, the President will surely do something.)

In July 2019, the President ordered all gaming activities of PCSO, including Lotto, suspended amid alleged “massive corruption” in the agency.

While there are reports of crimes involving POGO and its workers, Panelo said it is not the hubs itself that are bad, but the people behind it.

“The fact that it has been there, I suppose there’s good in it. But of course, there are also, as we have received reports, there have been many instances of using it in illegal practices,” Panelo said when asked if POGO benefits the country.

“It’s not naman the POGO itself eh, it’s the people running it. Then you change the people, not the system. You improve the system,” he added.

Several senators have agreed that there is a need for legislation declaring POGOs “illegal” due to crimes that have stemmed from its operations like money laundering, prostitution, and trafficking.

One of the recent controversies linked to POGOs is the “pastillas” scheme where airport personnel are allegedly bribed in exchange for the smooth entry of Chinese citizens who reportedly mostly work in offshore gaming operations.