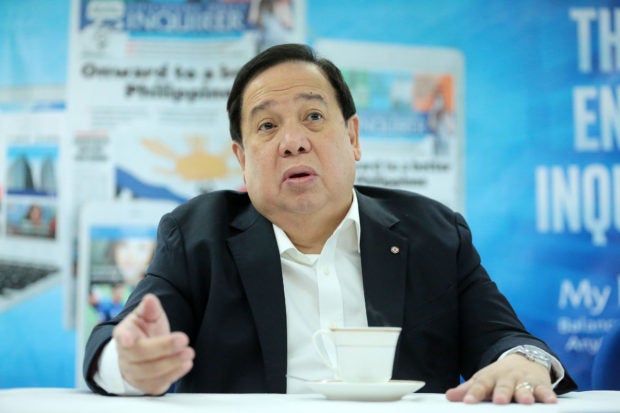 Sen. Richard Gordon engages Inquirer editors and reporters to a round table discussion during a visit to the Philippine Daily Inquirer headquarters in Makati City on February 27, 2020.
INQUIRER PHOTO / GRIG C. MONTEGRANDE

MANILA, Philippines — Senator Richard Gordon on Wednesday criticized the police over the killings of 16 personnel of the Bureau of Corrections (BuCor) since 2011 that today remain unsolved.

Gordon noted that most of the victims are killed within the vicinity or in the area of the New Bilibid Prison (NBP) in Muntinlupa City and were attacked by motorcycle-riding gunmen.

“If we are shown in America, pagtatawanan tayo. If we are in London pagtatawanan tayo. Hindi kayo marunong magsolve ng kaso. I am not trying to insult you but kung ako ang professional [in investigating crimes] hindi ko titigilan ‘yan,” Gordon told police officers present in a Senate hearing on the Good Conduct Time Allowance.

(If we are shown in America, they will laugh at us. If we are in London, we will be laughed at. You cannot solve cases. I am not trying to insult you but if I were a professional in investigating crimes, I will not stop until it is solved.)

The latest fatality was BuCor’s suspended legal division chief Fredric Anthony Santos, who was gunned down near the school of his daughter on February 19. The school was also near the NBP.

The senator said Santos should “not just be another statistics” in the deaths of BuCor personnel.

“Ang pinagtataka ko dito, bakit walang solved cases [I am puzzled at why there are no solved cases]? The Secretary of Justice and the Department of Justice should be the first person to react here along with the director of the Bureau of [Corrections],” he said.

“I want to see a summary of what has been done. We cannot close the book. Otherwise, we will keep repeating na wala kayo nasosolve [that you do not solve anything],” added the senator.

Gordon also expressed disappointment on the absence of BuCor chief Gerald Bantag in the Senate hearing, noting that it concerns his personnel.

Senator Ronald dela Rosa, who previously headed BuCor, meanwhile, reiterated he wants the death penalty be imposed to serve as a deterrent on the killing of the bureau’s personnel.