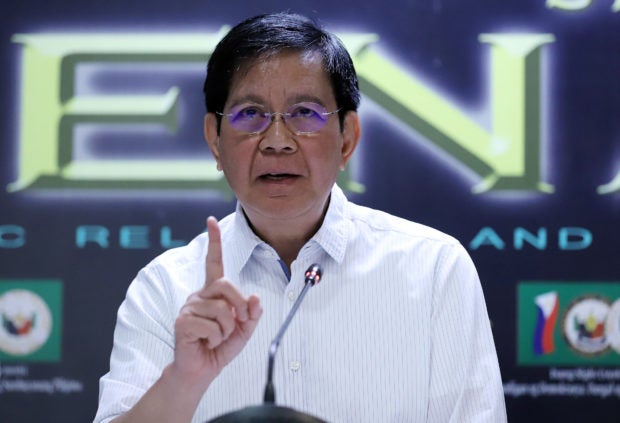 MANILA, Philippines — It is with “blind loyalty” that senators could turn into an “expensive rubber stamp,” Sen. Panfilo Lacson said, as he reminded his colleagues about what they should consider when casting their votes on issues being tackled by the upper chamber.

“When we cast our vote on any matter under deliberation, we should be dictated only by our own conscience and what we honestly think is good for our country, and the institution where we belong — and not because of blind loyalty to any person or party,” he said in a statement on Tuesday.

“While loyalty is a virtue, blind loyalty is simply just that — blind,” he added. “Otherwise, we can no longer be the Senate of the people that we are supposed to be, but an expensive ‘rubber stamp’ that our taxpayers have to sustain out of their hard-earned tax money.”

Lacson said this a day after the body adopted a resolution seeking clarification from the Supreme Court on the Senate’s role in treaty termination following President Rodrigo Duterte’s unilateral withdrawal of the Visiting Forces Agreement (VFA) between the Philippines and the US.

Twelve voted in favor of the resolution and seven administration-allied senators abstained from voting on the measure.

After the resolution was adopted, Senate Minority Leader Franklin Drilon expressed regret at the failure of the Senate to summon a unanimous vote on the measure.

Neophyte Senator Ronald “Bato” dela Rosa, one of the senators who abstained from voting, said he was also saddened because the majority bloc—where he belongs—was not able to get the majority vote on the said issue.

“Having said that, there is no reason to be saddened either way by the voting on Senate Resolution 337. That is democracy at work in the Senate,” Lacson went on.