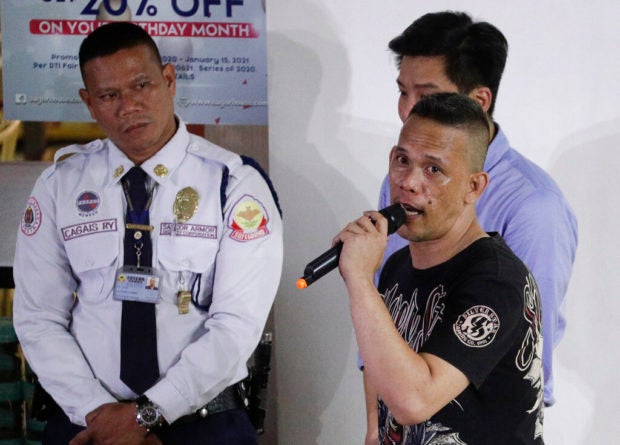 MANILA, Philippines — Even though he was offered P1 million by his security agency in exchange for his surrender and the release of his hostages, a former security guard turned mall hostage-taker Alchie Paray refused the offer and insisted that his grievances be heard.

This was revealed by San Juan City Mayor Francis Zamora on Tuesday, a day after Paray took a group of people hostage inside the V-Mall in Greenhills, San Juan.

[The security agency was offering him P1 million but he refused it because it wasn’t money that he needed.]

[What he needed was for his grievances to be heard. It was very simple. So we granted him that.]

When Paray held his hostages at gunpoint, he made several demands. He demanded to talk to his fellow security guards as well as the media and he wanted his superiors at the SASCOR Armor Security Corp. to publicly apologize to him and then resign from their posts.

Zamora revealed that Paray had agreed to release the hostages and surrender to authorities as long as he was allowed to hold a “press conference,” to which the authorities have agreed to.

He claimed that security guards working in the mall are being fired without any explanation or investigation.

He also alleged that his superiors were taking bribes so as to “protect” the mall tenants.

[There are many shenanigans that have not been noticed. That’s why I thought of taking people hostage. This situation has been going on since December.]

[It came to the point that they had to lay off working guard just to protect their tenants.]

[Hopefully, this would serve as a lesson, not only for this establishment but anywhere where there are people working. We are all important. To all management, let’s respect each other. Let’s not put down our own colleagues.]

READ: How the Greenhills hostage-taking unfolded

Paray was allowed to speak to reporters for about 20 minutes and aired his grievances against his employers before he was arrested by the police.