Imee says no threat on Senate leadership: ‘No one wants their jobs’ 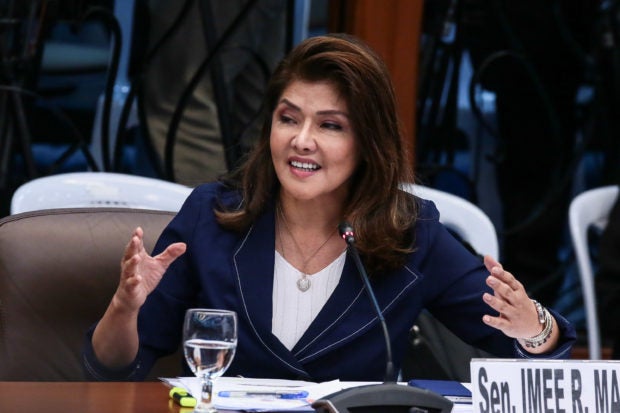 MANILA, Philippines — “No one wants their jobs.”

Senator Imee Marcos said Tuesday as she assured that there are no threats in the upper chamber’s present leadership.

This after Senate President Vicente Sotto III initiated a resolution seeking for clarification with the Supreme Court on the chamber’s role on abrogating agreements or treaties following the unilateral withdrawal of President Rodrigo Duterte from the Visiting Forces Agreement (VFA) with the US.

Twelve senators voted in favor of the resolution, while seven administration-allied senators, including Marcos, abstained from voting.

“Okay naman…Wala namang reklamo [It’s fine… no complaints],” Imee told reporters in an interview on Tuesday when asked on the leadership of Sotto.

She was also asked about the leadership of Senate Majority Leader Juan Miguel Zubiri, who co-sponsored the said resolution.

In a separate interview with reporters, Sotto brushed aside threats on the chamber’s leadership.

“I only serve at the pleasure of my colleagues. You can replace me anytime. I have no problem with that,” he said.