UN envoy for Libya resigns as truce appears to crumble 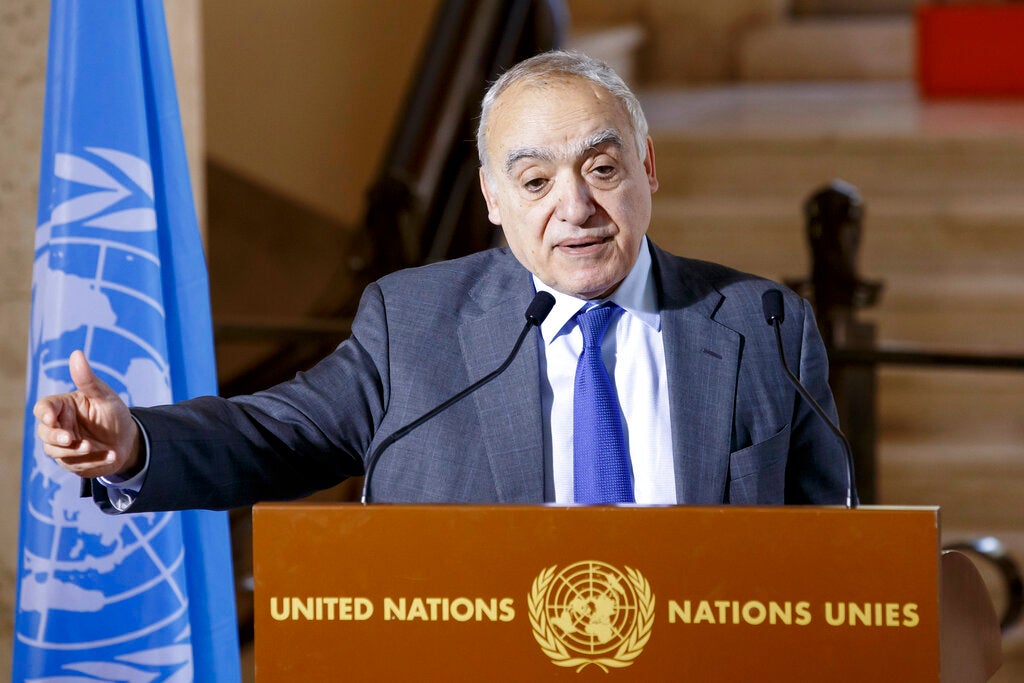 CAIRO  — The U.N. envoy for Libya announced his resignation on Monday, as a fragile cease-fire in the North African country continued to crumble.

Ghassan Salame tweeted he was stepping down as special representative for Libya because of his health.

Salame was appointed in July 2017, and had recently been mediating three-tiered talks between Libya’s warring sides on economic, political and military tracks.

His goal had been to end the violence and troubles that have wracked oil-rich Libya since 2011, when an international military coalition helped rebels overthrow longtime autocrat Moammar Gadhafi.

In his tweet, Salame, 69, said he had tried to “unify the Libyans, curb foreign interference and protect the country’s integrity.”

“My health no longer allows this rate of stress,” he said, adding that he had asked U.N. Secretary-General Antonio Guterres to relieve him of his post.

Salame’s resignation came as a surprise to many U.N. Security Council members who was expected to brief members next week.

China’s U.N. Ambassador Zhang Jun, the current Security Council president, said: “We do appreciate the efforts he has made in promoting a peace process, a political process, and in bringing an end to the conflict there. But we also know there are many difficulties.”

Last month, the council endorsed a 55-point road map to end the war in Libya that 12 key leaders agreed to at a conference in Berlin on Jan. 19 and Zhang said the U.N. should remain committed to supporting a Libyan-led and Libyan-owned peace process “and trying to stop outside interference.”

Guterres praised Salame’s efforts and would discuss “the way to ensure a smooth transition so as not to lose any momentum on the gains that have been made,” said U.N. spokesman Stephane Dujarric.

Salame resigned amid an escalation in fighting in Libya, and just days after he announced the near breakdown of a shaky truce between the country’s two rival governments.

One administration controls most of Libya’s east and south, while a U.N.-backed but weak administration holds a shrinking area of the west, including the capital Tripoli. A patchwork of armed groups and foreign countries support either side.

The Tripoli administration is backed by Turkey, and to a lesser degree, Qatar and Italy. Hifter on the other side receives backing from the United Arab Emirates and Egypt, as well as France and Russia.

Salame’s stint was affected by relentless bouts of Libyan fighting, said Jelal Harchaoui, a Libya expert at The Netherlands Institute of International Relations,

“Salame is a credible and talented diplomat, but it in the end, the role of UN special envoy cannot and won’t achieve any tangible progress as long as foreign states remain so brazenly disingenuous vis-à-vis the UN as an institution,” he said.

While hosting diplomatic talks in Geneva last week, Salame had exposed a rift within the delegations representing the Tripoli government and the eastern-based government, which is allied with ex-general Khalifa Hifter.

Salame revealed Friday that delegates to the political negotiations “from both sides” had walked away from the table.

Hifter’s forces have been waging an offensive to wrest control of the capital since April. The fighting for Tripoli has ground down to a stalemate while causing hundreds of civilian casualties.

Hifter’s forces had shelled the capital Friday, forcing the city’s only functioning airport to close.

Later that day, Salame said progress in the negotiations was impossible “when the cannon is doing what it is doing right now.”