MOSCOW  — Russian President Vladimir Putin on Monday submitted a slew of new proposed amendments to the country’s Constitution that include a mention of God and describe marriage as a heterosexual union. 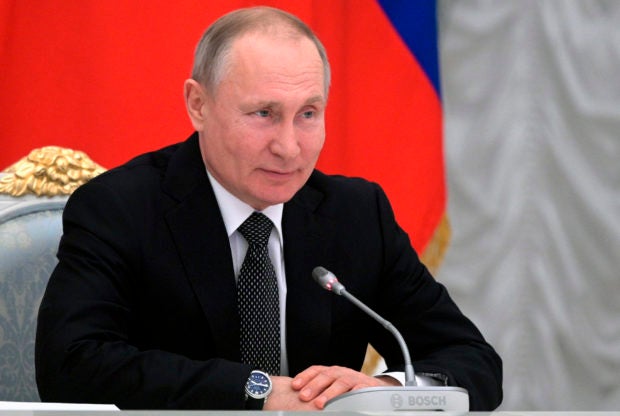 Putin first proposed amending the constitution in January’s state-of-the-nation speech, saying it is necessary to broaden the powers of parliament and bolster democracy. Kremlin foes have described the proposed changes as part of Putin’s efforts to remain in charge after his current six-year term ends in 2024.

The Kremlin-controlled parliament quickly endorsed Putin’s draft in the first of three required readings last month, and is set to give it the final approval next week, setting the stage for a nationwide vote on April 22.

Following up on proposals from a Kremlin working group that worked in parallel with lawmakers, Putin on Monday presented 24 pages of additional amendments for the second reading set for March 10.

Lawmakers say they include an article that points to a millennium-long Russian history and pledges homage to “ancestors who bequeathed to us their ideals and a belief in God.”

The amendment follows a proposal by the Russian Orthodox Church to add a reference to God to the Constitution.

Another amendment describes marriage as a “union of a man and a woman,” a wording in sync with Putin’s long-stated opposition to same-sex marriages.

The president also responded to a working group member’s suggestion to add wording that would prevent any future Russian ruler from giving away Ukraine’s Crimea — annexed from Ukraine in 2014 — or any other territory. He added an amendment that prohibits surrendering any part of Russian territory and outlaws making calls for that.

The amendment comes as Russia prepares to celebrate the 75th anniversary of victory in World War II — the nation’s most important holiday.

The new set of amendments doesn’t offer any clue, however, what position Putin may take to continue calling the shots after his term ends. The 67-year-old Russian leader has been in power for more than 20 years, making him the nation’s longest-serving leader since Soviet dictator Josef Stalin.