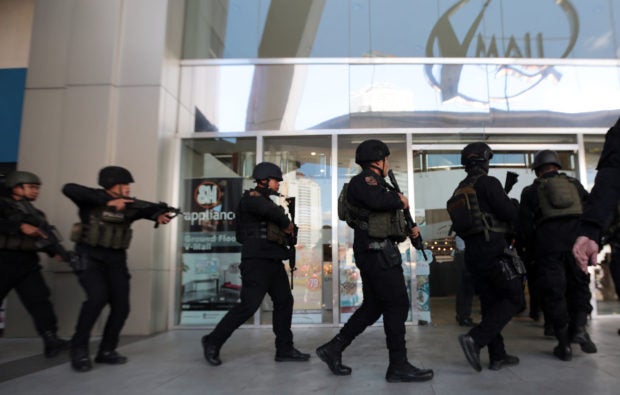 MANIC MONDAY SWAT commandos storm V-Mall in Greenhills, San Juan, on Monday morning to respond to the hostage-taking that dragged on for hours. —GRIG C. MONTEGRANDE

There was no sign the drama — which began on Monday morning when Alchie Paray fired at a former colleague and held dozens of mall and security personnel hostage at the administration office on the mall’s second floor — was going to end soon until the hostages were released around 8:15 p.m.

In the end, hours of negotiations by Mayor Francis Zamora and police officials — including the grant of some of the hostage-taker’s demands — paid off.

Paray, who was allowed by the police to talk to reporters, minced no words as he railed against mall security officers whom he accused of accepting money from a tenant in exchange for his transfer to another post at the shopping complex in Greenhills district.

He claimed the tenant resented him for barring the tenant from entering the mall before it opened.

“They treated us like fools and nobody complained,” he said of the security officers. He initially thanked the authorities for giving in to his demands.

In the middle of his rant, SWAT commandos pinned him down. Police later found a gun still tucked in his waist. He was brought to San Juan police headquarters for investigation.

Before the tension rose, Paray asked Mayor Zamora where he would go after his surrender.

“Will it be in a cemetery or in the police station?” Paray said.

The mayor replied that he needed to be brought to the police first for investigation.

The hostage-taker retorted, “I’d rather go to the cemetery.”

Paray claimed it was a “miracle” that he was able to get out of the building still alive.

“If it were me, I’d rather that Macoy (a fellow security guard) shoot me in front of the media. Or I could just shoot myself, I’m that prepared to die,” he said.

The officials had earlier granted Paray’s demands aired on Facebook live that six mall security officers — who fired him for going Awol (absence without leave) for weeks — issue a public apology and quit their posts, and that food and water be delivered to the hostages.

He had earlier demanded that the six security officers swallow peso bills amounting to P2,500, but later relented and made other demands.

“Seems like he believes that he was done an injustice, maybe by the security agency or the mall management. Maybe he wanted to air his grievances to his fellow guards,” Zamora told reporters. “He expressed disgust over what happened to him.”

Paray walked into V-Mall’s administration office around 10 a.m. on Monday, then pointed a gun at one of the employees and declared that he was holding the entire office hostage, according to the police.

Paray shot Ronald Velita, another security guard. As Velita was rushed to a nearby hospital, SWAT commandos stormed the mall, home to electronics and clothing stores, to deal with the situation. Velita was later declared out of danger.