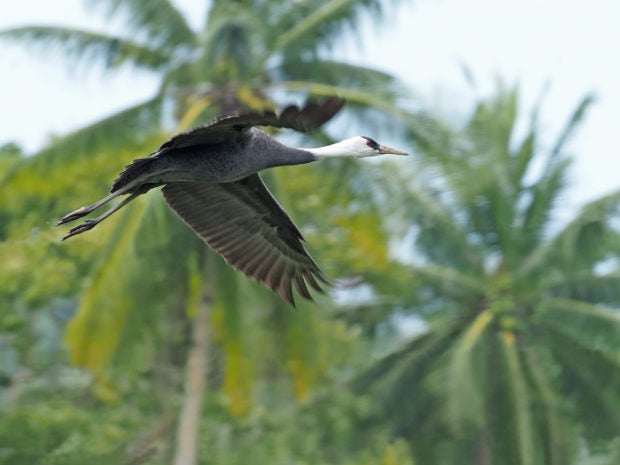 SIARGAO STOP The discovery of hooded cranes on Siargao Island is the first documented sighting of this migratory bird species in the Philippines. The birds are usually seen in the cooler climes of Japan and Korea at this time of the year. —ROBERT HUTCHINSON / CONTRIBUTOR

The recent arrival of a flock of rare hooded cranes (Grus monacha) on Siargao Island in Surigao del Norte province has stirred excitement among bird lovers in the country, as this is the first time that this species has made landfall in the Philippines.

Greg Laude, resident bird watcher and author of the website www.wildsiargao.com, first spotted the group of seven cranes on Feb. 25 near Barangay Libertad in Santa Monica town in Siargao.

Laude was able to secure photographs to allow the record to be quickly confirmed, but these friendly birds, standing a meter tall, had already attracted the attention of local farmers who reported that the cranes had been sharing their fields for the past week.

The hooded crane breeds far to the north of the Philippines — in eastern Russia and northern China — heading further south during winter. A majority of these birds settle in Japan, where the species is welcomed in large numbers each winter, and are carefully protected.

The species is considered vulnerable and threatened with possible extinction due to a small and declining population on a global scale, according to bird experts.

“The Philippines lies on the East Asian Flyway and is a very important area for many migratory birds, and we are happy these cranes have made Siargao their temporary home,” he said.

According to Jensen, wild birds, such as the hooded crane, are protected by law, with stiff penalties awaiting those who hunt endangered species.

He said the cranes appeared happy with their new feeding grounds, and were expected to continue feeding in the area before heading northward to Russia in time for their breeding season. 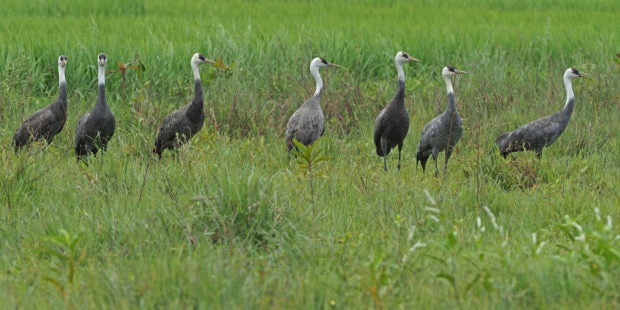 SIARGAO VISITORS A flock of spectacular hooded cranes on Siargao Island has caused great excitement among residents and bird watchers alike. The rare birds, usually seen in the cooler climes at this time, are likely to have been blown further south by the northeast monsoon. —ROBERT HUTCHINSON/CONTRIBUTOR

Mike Lu, president of the Wild Bird Club of the Philippines, was thrilled with the sighting.

“Last November, during the Korean Bird Fair, we witnessed thousands of hooded cranes in Suncheon Bay. It comes as a big surprise, actually more of disbelief, that this flock of hooded cranes will show up, of all places, in Siargao in Mindanao,” Lu said.

“By a stroke of luck and timing, these birds were seen by a bird watcher. It makes me wonder what other bird species are out there that we are missing out on, and might we one day see the sarus cranes (Grus antigone) return to the Philippines,” he added.