Leachon removed from HRET due to pending case there, Villafuerte says

But Leachon claims it was Villafuerte who was seeking help
By: Gabriel Pabico Lalu - Reporter / @GabrielLaluINQ
INQUIRER.net / 10:10 PM March 02, 2020 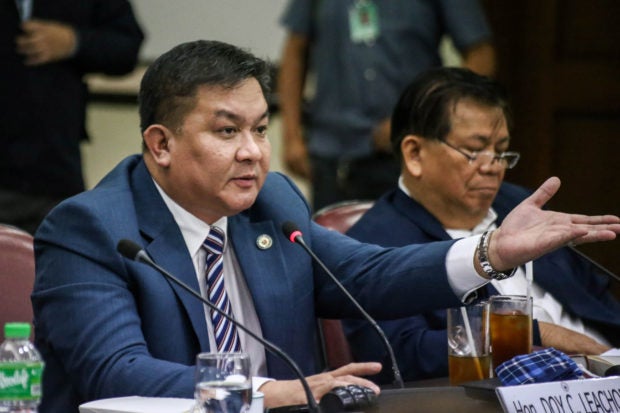 MANILA, Philippines – One of the reasons why Oriental Mindoro 1st District Rep. Salvador “Doy” Leachon was removed as a member of the House of Representatives Electoral Tribunal (HRET) was because of his pending case before the constitutional body.

This was the statement given by Leachon’s critic, Deputy Speaker Rep. Lray Villafuerte, who represents the 2nd District of Camarines Sur, hours after the majority moved to replace Leachon.

“When he was applying [for a position in the House], his first request was to be an HRET member.  Then he became chairman.  But he did not disclose that he had a case there,” Villafuerte, speaking partly in Filipino, told reporters in an ambush interview.

“I mean, can you imagine — I mean delicadeza. That’s a conflict of interest.  You’re the chairman of the HRET at the same time you have a case,” he added.

However, Leachon said in a text message to INQUIRER.net that Villafuerte’s claim was ridiculous — since it was Villafuerte who was supposedly asking a favor for his father.

“[It’s] clear that he’s been hit hard by the budget insertions,” he added.

Leachon and Villafuerte have been engaged in a word war after Leachon called his rival an opportunist for using the deputy speaker post to take advantage of higher budget allocations for his district.

The quarrel only grew after a rumor circulated that there was a plan to unseat Cayetano.  Villafuerte said that the camp of Marinduque Rep. Lord Allan Velasco was too eager to become the ruler over the House and disregard the term-sharing agreement set by President Rodrigo Duterte.

Before the 18th Congress convened, Cayetano, Velasco, and Majority Floor Leader Martin Romualdez squared off for the House speakership race.

While Romualdez settled for his current post, Duterte intervened and arranged a term-sharing scheme for the two remaining bets, with Cayetano getting the first 15 months and Velasco, the remaining 21 months.

But on the other hand, Leachon urged Cayetano’s allies to name the lawmakers who were supposedly promised House posts and budgetary considerations once Velasco had taken over.

But aside from that Leachon’s supposed HRET anomaly, Villafuerte said that they had also received corruption allegations against the lawmaker.

While the rumored changes in the House did not happen, certain adjustments took place — like the removal of Leachon from the HRET and Davao City 3rd District Rep. Isidro Ungab from the House Committee on Appropriations chairmanship.

Rep. Eric Yap of the ACT-CIS party-list, former chair of the Committee on Games and Amusement, was chosen to replace Ungab.   Abra Rep. Joseph Sto. Niño Bernos took over Yap’s place, although Yap would still occupy a vice chairman role in the committee on games and amusement.