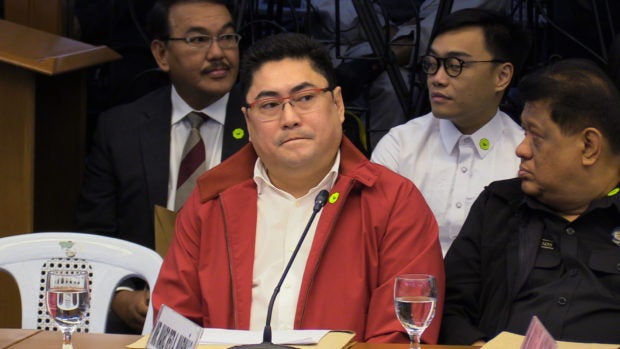 Marc Red Mariñas asserted during Monday’s resumption of the Senate hearing on alleged prostitution and trafficking linked to Philippine offshore gaming operators (POGOs) that whistleblower and immigration officer Allison Chiong’s testimony contains warped details “to suit his intention of passing it to the committee as evidence of corruption.”

“I’m thankful to be given this opportunity to shed some light to this ‘pastillas’ scheme alleged to be a modus in a very massive scale by which immigration officer extort money from predominantly Chinese tourists,” Mariñas told the hearing of the Senate committee on women, chaired by Senator Risa Hontiveros.

Mariñas, who became POD chief in 2016, addressed Chiong’s video showing how arriving Chinese citizens are being accompanied to BI’s office at the airport seemingly for identity validation before a supervisor who supposedly has the list of Chinese people that are expected to enter the country.

“Allow me to address the video that was presented by Mr. Allision Chiong. A video in which Mr. Chiong admitted he himself recorded. Ito pong video na ito was clearly taken with malice with the intention of making it appear that VIP treatment is being accorded to Chinese nationals in exchange for money,” Mariñas told the Senate panel.

“Ito pong video na ito ay (This video was) produced, directed by and starring role na rin po si  (by) Mr. Chiong where an ordinary innocent standard procedure in the course of primary inspection of arriving passengers was twisted to suit his intention of passing it to the committee as evidence of corruption,” he added.

Chiong linked Mariñas to the “pastillas” modus wherein a Chinese citizen purportedly pays a P10,000 “service fee” to allegedly enter the country fuss-free. Supposedly, P2,000 of this fee is being divided among officials of BI’s Travel Control and Enforcement Unit (TCEU), duty Immigration supervisor, and terminal heads, while the P8,000 will be given to tour operators and syndicates who will transport the Chinese from the airport to POGO facilities.