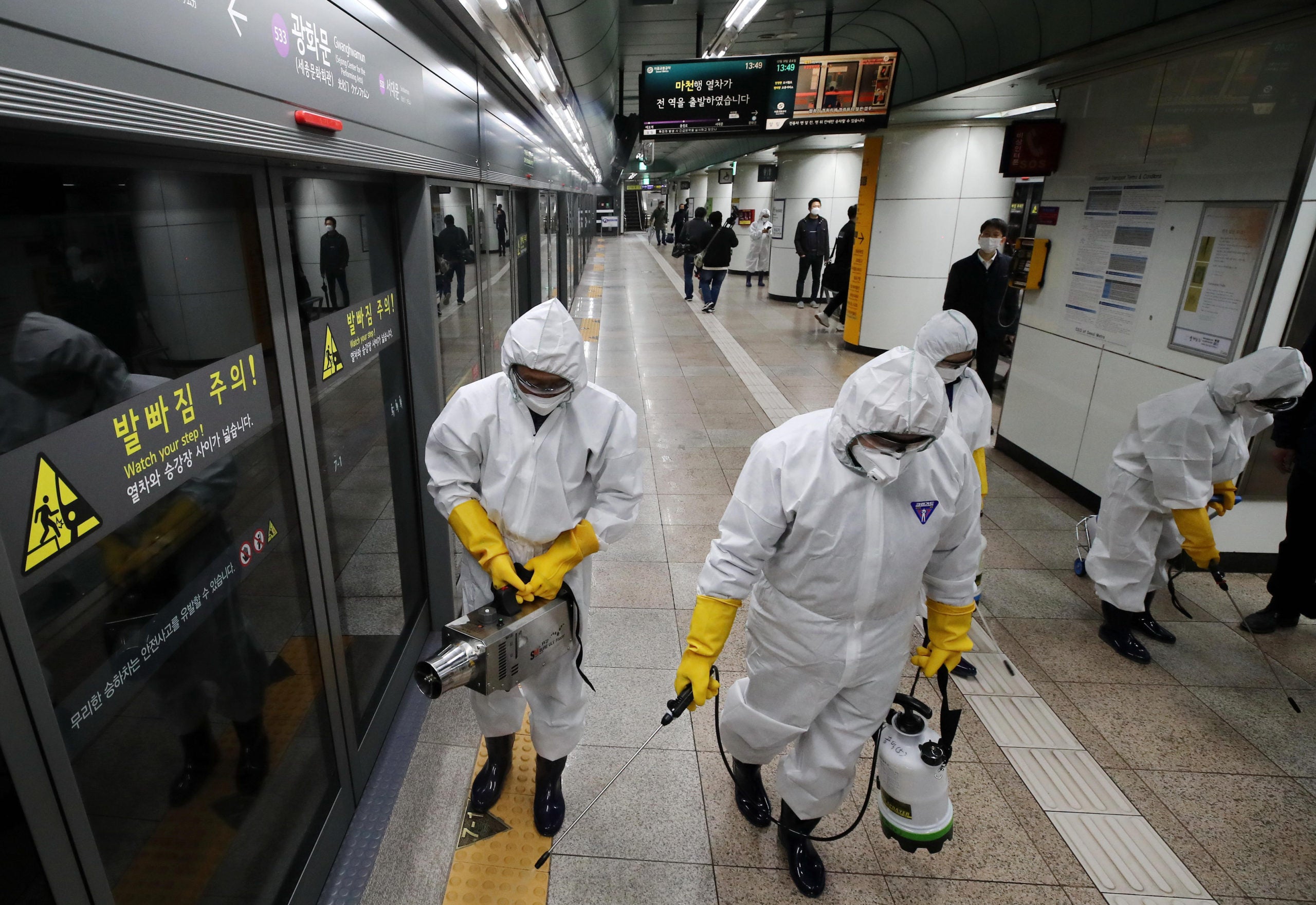 Workers wearing protective gear spray disinfectant as part of preventive measures against the spread of the COVID-19 coronavirus, at a subway station in Seoul on February 28, 2020. – K-pop megastars BTS on February 28 canceled four concerts they were due to hold in Seoul in April, their agency said, as the coronavirus outbreak spreads in South Korea. The country has so far confirmed more than 2,000 cases of the novel coronavirus, by far the largest national total outside China, the origin of the disease. (Photo by – / YONHAP / AFP) / – South Korea OUT / REPUBLIC OF KOREA OUT NO ARCHIVES RESTRICTED TO SUBSCRIPTION USE

SEOUL — South Korea confirmed 594 more coronavirus cases on Saturday, the biggest increase to date for the country and taking the national total to 2,931 infections with three additional deaths.

More than 90 percent of the new cases were in Daegu, the center of the country’s outbreak, and its neighboring North Gyeongsang province, the Korea Centers for Disease Control and Prevention (KCDC) said in a statement.

Three women in the Daegu area died of the illness, taking the national toll to 16, the statement added. One of the victims was aged in her 90s.

The other two tested positive for the coronavirus posthumously, the Yonhap news agency reported.

The national total is expected to rise further with screening of more than 260,000 people associated with the Shincheonji Church of Jesus, a secretive entity often accused of being a cult that is linked to around half of the country’s cases.

A 61-year-old female member developed a fever on February 10, but attended at least four church services in Daegu — the country’s fourth-largest city with a population of 2.5 million — before being diagnosed.

Facing public criticism, a Shincheonji spokesman said the church members were “victims” of the outbreak, calling the backlash a “witch hunt.”

“I ask you to discard hatred and criticism against our members,” said the spokesman in a video posted on the Shincheonji website.

More than 86 percent of South Korea’s coronavirus cases are in Daegu and the neighboring province of North Gyeongsang, according to the KCDC.

Of those who test positive for the virus, 80 percent can be treated with medication because they have “light symptoms”, said vice health minister Kim Gang-lip, adding that the rest would need more advanced treatment in hospitals.

The streets of Daegu have been largely deserted for days, apart from long queues at the few shops with masks for sale.

Authorities have urged the public to exercise caution and anyone with a fever or respiratory symptoms to stay home.

But officials say they are not considering a citywide quarantine similar to the lockdown imposed on the central Chinese city of Wuhan, where the virus first emerged.

A surge in confirmed cases has led many events to be canceled or postponed as the outbreak has hit the world’s 12th-largest economy, including concerts by K-pop superstars BTS and the World Team Table Tennis Championships.

The new school term has been delayed by one week, and the US and South Korean militaries have postponed forthcoming joint exercises.

Auto giant Hyundai Motor also suspended operations at one of its Ulsan plants after an employee tested positive for the coronavirus.