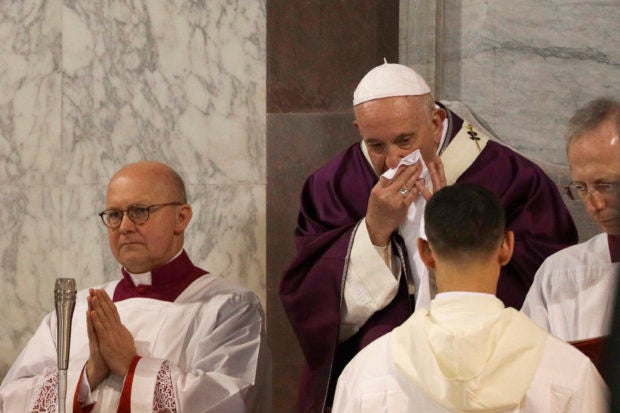 In this picture taken Wednesday, Feb. 26, 2020, Pope Francis wipes his nose during the Ash Wednesday Mass opening Lent, the forty-day period of abstinence and deprivation for Christians before Holy Week and Easter, inside the Basilica of Santa Sabina in Rome. Pope Francis is sick and skipped a planned Mass with Rome clergy across town on Thursday, Feb. 27, 2020, officials said. (AP Photo/Gregorio Borgia)

VATICAN CITY — Pope Francis canceled his official audiences Friday after apparently coming down with a cold.

The Vatican said the 83-year-old pontiff celebrated morning Mass as usual and greeted participants at the end. He planned to keep his private meeting schedule as planned, but decided to cancel the official audiences, the Vatican said.

The Vatican hasn’t said what exactly Francis has come down with, but he was coughing and blowing his nose during Ash Wednesday Mass this week.

On Thursday, he canceled a planned trip across town to celebrate Mass with Rome priests.

His illness comes amid an outbreak of the coronavirus in Italy that has sickened more than 650 people, almost all of them in the north. Rome had three cases, but all three recovered.

The Argentine pope has generally enjoyed good health. He lost part of one lung as a young man because of respiratory illness and suffers from sciatica, which makes walking difficult.

Read Next
Cebu gov orders 14-day quarantine on travelers from North Gyeongsang
EDITORS' PICK
Congress urged to extend session for approval of COVID-19 response bills
Amid protests, Trump talks of war — and reelection
Cherry Mobile teams up with Cloud Panda PH, launches online store
DOH: COVID-19 mortality doubling time, transmission rate down
Leveling up your ‘lutong bahay’ with the kitchen companion you never knew you needed
Restaurant dine-in operations approved in MGCQ areas
MOST READ
Binay dares DOTr execs to commute to work during GCQ
51 percent of German firms holding back investments in PH, but not because of COVID-19
Pia Wurtzbach confirms dating Jeremy Jauncey
Chaos as thousands return to work in Metro Manila
Don't miss out on the latest news and information.