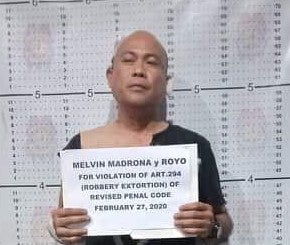 MANILA, Philippines — The chief of the Criminal Investigation and Detection Group (CIDG) in Bacolod City was arrested by the anti-corruption unit of the Philippine National Police (PNP) for allegedly demanding protection money from owners of a KTV bar.

Madrona was arrested by IMEG operatives in an entrapment operation at 5:35 p.m. Thursday in a cockpit arena in Mansilingan town, Bacolod City where he allgedly received P5,000 cash from one of the complainants.

Also arrested in the operation was his alleged civilian cohort identified as Jay-R Dela Cruz, whom Lee described as a “fighting cock handler.”

According to Lee, the IMEG received a complaint that Madrona was demanding P5,000 in protection money each week from the owners of a KTV bar “in exchange for unhampered operations.”

Investigation revealed that prior to this, the owners of the bar as well as their employees, and their Japanese customers were brought to the CIDG office in the city after the KTV was raided at around 11 p.m. on February 8.

But according to the IMEG, all those rounded-up were released the day after on the condition that the KTV owners will provide protection money every Thursday.

Aside from this, the complainants added that Madrona forced them to pay for his travel expenses and hotel accommodation, according to Lee.

The IMEG chief said the complainants started giving the P5,000 cash on February 20 to a certain Senior Master Sergeant Nabarte on the instruction of Madrona. The identity of this other policeman is still being verified by investigators.

Lee also said that a background check showed that Madrona was also charged with physical injury, arbitrary detention, and grave coercion on March 22, 2017 after allegedly beating-up an overseas Filipino worker after they figured in a vehicular accident. Madrona was then assigned at the Quezon City Police District Station 5.

Madrona and Dela Cruz are now under the custody of PNP-IMEG and will be facing a case of robbery-extortion. A separate administrative case will be filed against Madrona.