PARIS  — French authorities on Thursday reported twenty new cases of people infected with the new virus in the past 24 hours, bringing the total in the country to 38, including two deaths. 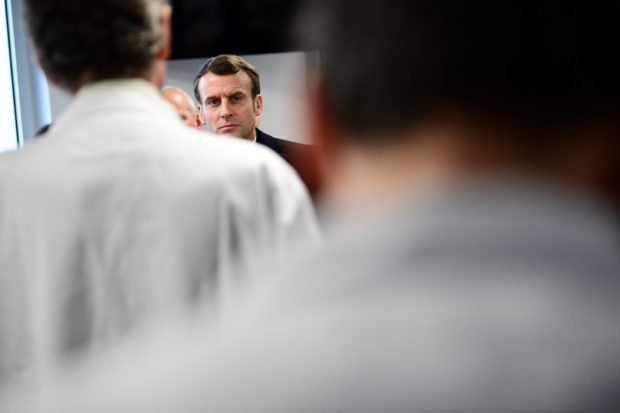 French President Emmanuel Macron visits the Pitie-Salpetriere hospital in Paris on February 27, 2020 where the first French victim of COVID-19 passed away the day before. – France has so far registered 18 infections and two deaths, a 60 years-old French citizen and a 80 years old Chinese tourist, as European governments scramble to contain a slew of new coronavirus cases popping up across the continent. (Photo by Martin Bureau / POOL / AFP)

The jump in figures prompted concern as French President Emmanuel Macron warned earlier that the country was bracing for an epidemic.

The head of France’s national health agency, Jerome Salomon, said 24 people were in hospital Thursday, while 12 others have been cured.

French health authorities have found that 12 of the new patients, including three working on a military base, are all connected to two previous cases in the Oise region, north of Paris: a 60-year-old Frenchman who died this week and another Frenchman who is in intensive care in the northern city of Amiens.

French authorities are still trying to determine how they contracted the virus since they did not travel to a risk zone.

The man who died this week was a teacher in a middle school in the Oise region. He had not been in contact with schoolchildren for the past two weeks.

Amid other new cases are people coming back from Italy and others who take part in a group tour to Egypt.

Health Minister Olivier Veran said French authorities’ priority was now to get the spread of the virus under control, as neighboring Italy was the site of Europe’s biggest cluster of cases.

The new figures come as French President Emmanuel Macron visited a Paris hospital Thursday and warned that “we are facing a crisis, an epidemic that is coming.”

He later traveled to Naples, in southern Italy, for a bilateral summit.

The first death in France was an 80-year-old tourist from China.