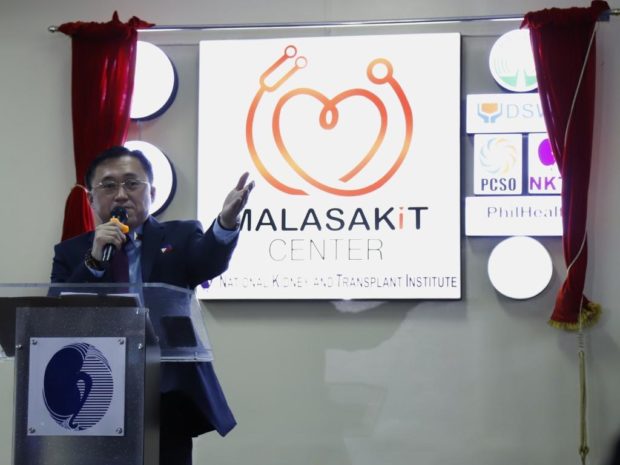 Before the launch, Go also witnessed the signing ceremony of the Implementing Rules and Regulations (IRR) of the Malasakit Center Act of 2019 that was held in the same institute.

In his speech, Go, also the Senate Health Committee chair, told the crowd present at the launch of the Malasakit Center in the country’s premier kidney center that, finally, the program is already accessible to patients there.

(Now you have Malasakit Center. This is yours. You will no longer wander around asking assistance because help can now be find inside NKTI.)

The senator also emphasized that it is the people’s money that is being used in many programs of the government, and that it should be given back to the Filipinos through more accessible government services, like the Malasakit Center.

(Actually, all of these come from your own money. You will no longer go outside to find assistance because Malasakit Center is already inside NKTI. You can process everything here.)

(Let’s not put additional burden to these patients. This is the time in their life that they are too distraught already from trying to find assistance, enduring the heat outside to ask for help. Why just don’t we approach them to offer assistance.)

Go also mentioned in his speech that the government will push through with its plans in strengthening NKTI to perform liver operations addressing liver problems particularly pediatric biliary atresia.

(We plan to send doctors in Taiwan to study. We have excellent doctors here in the Philippines. Children that need liver transplant no longer need to go to India. Here in our country can take care of them.)

The NKTI is a tertiary specialty center attached to the Department of Health (DOH) which focuses on service, training, and research in the field of renal diseases and organ transplantation. The center’s mandate is to specialize in the prevention, diagnosis, rehabilitation, and treatment of kidney and allied diseases through dialysis and transplantation.

(If we are here in the Philippines, PCSO, PAGCOR, PhilHealth, DOH, DSWD can help them. It is harder when you are outside the country. We already have the capacity, let’s just patronize our own.)

This comes after several instances where both President Rodrigo Duterte and the senator have financially helped infants who have biliary atresia to be operated in India.

Biliary atresia is a condition acquired by infants when bile ducts inside and outside the liver are scarred and blocked. There is an increase in the number of children who are suffering from the liver disease recently and, currently, there is no available operation for pediatric biliary atresia. Most Filipino patients need to be sent to India and spend at least three million pesos for the whole operation.

In previous statements, Go and President Duterte have already stated that they want to capacitate NKTI to have the operations done locally instead of going abroad to seek treatment, making it less burdensome on the part of families with children afflicted with the disease.

Meanwhile, in an ambush interview, Go told reporters how important the IRR is for the Malasakit Center program which was signed into law by President Duterte on December 2019.

(Thanks you. The IRR in Malasakit Center is very important. Now it can be fully implemented and they can now follow a certain criteria.

The Senator pointed out that the IRR will become a the basis and guide for Malasakit Centers in all Department of Health (DOH)-run hospitals in the country. He also mentioned that the IRR shall indicate a set of criteria in establishing Malasakit Centers even in LGU-run hospitals to ensure consistency and sustainability of services that will be available for their constituents.