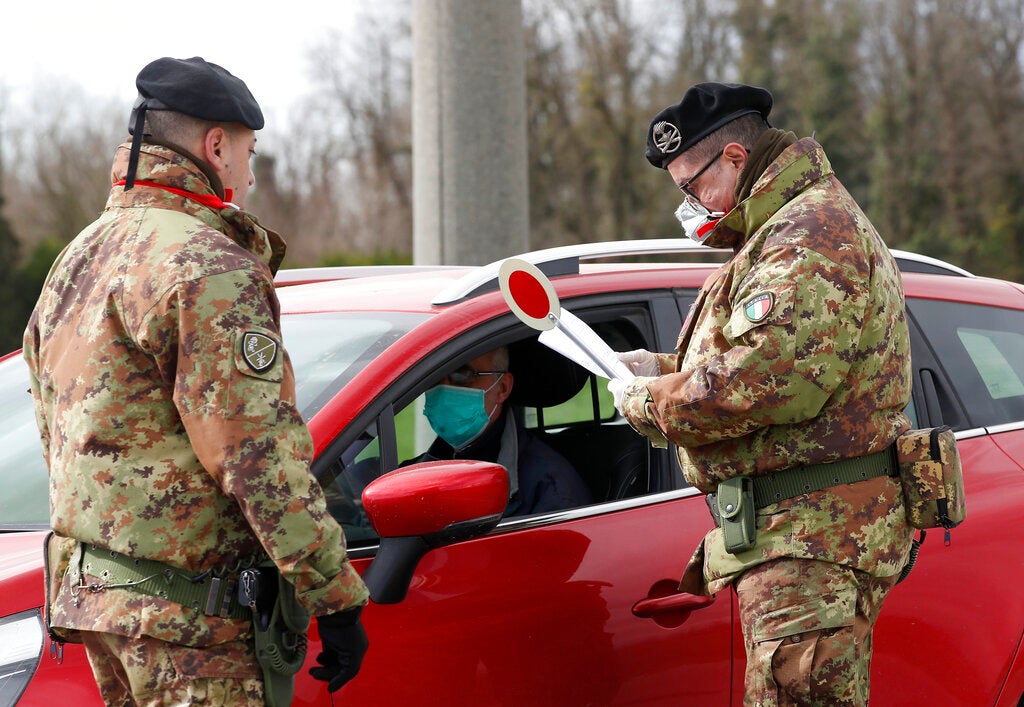 Italian Army soldiers check transit to and from the cordoned areas in Turano Lodigiano, Italy on Wednesday. (AP)

ROME  — Italy sought to rally international support for its virus containment efforts Wednesday even as its caseload reached 447, people linked to Italy fell ill across Europe and as far away as Brazil, and the U.N.’s health agency urged a scaled-up response.

Italian Premier Giuseppe Conte’s government appealed to European neighbors for cooperation, not isolation and discrimination. Italy has been struggling to contain the rapidly spreading outbreak that made it the country with more coronavirus cases outside Asia than anywhere else.

“Viruses don’t know borders and they don’t stop at them,” Italian Health Minister Roberto Speranza insisted at the start of a crisis meeting with World Health Organization and European Union representatives in Rome.

Twelve people infected with the virus have died in Italy since Friday, all of them elderly, having other health conditions or both, civil protection chief Angelo Borelli said.

The Italian government has defended its handling of the public health emergency while acknowledging the inability to pinpoint the origins of two clusters in the northern Lombardy and Veneto regions, as well as growing alarm as cases increase.

Germany and France also reported two cases apiece in people with no known ties to Italy, travel to China or contact with an infected person, raising concern about additional clusters of no known origin possibly forming in Europe.

“We are at the beginning of a coronavirus epidemic in Germany,” German Health Minister Jens Spahn said, adding that he had asked state health officials to review their emergency plans for pandemics.

Latin America’s first confirmed virus case did have a clear Italian connections. Officials reported Wednesday that a Brazilian man who recently visited Lombardy, the epicenter of Italy’s outbreak, tested positive. Algeria reported Tuesday night that an Italian man who traveled to the north African country this month as its first case.

Spain has reported nine new cases since Monday, all with an Italy link, two of France’s five new cases had ties to Italy, and Finland reported its second case in someone who had been in Milan, Lombardy’s capital. Local authorities in Austria took quarantine measures after two unconfirmed cases had an Italy link, only to remove them when tests came back negative.

Italy had 447 cases as of late Wednesday. Hard-hit Lombardy, where 10 towns are on army-guarded lockdowns, still had the most infected people: 305 — four of them children. But Veneto saw a spike of 28 cases overnight, bringing its total to 71.

In France, a 60-year-old Frenchman died in a Paris hospital, France’s second virus-related death. His case worried French authorities, because he was one of two new patients who tested positive for the virus in France this week who had not traveled to a “risk zone,” according authorities in his home region north of Paris.

A German man with the virus was in critical condition and his wife also tested positive, but German officials to date have not been able to trace the origin of their contagion. Officials expressed fear of infections spreading since the wife works in a kindergarten and the man had been to Carnival parties.

The man had come into contact with dozens of people, including doctors and nurses at a Cologne hospital where he had gone for an unrelated health checkup, German officials said. Schools and kindergartens in the area where he became ill remained shut.

The Italian national health system has been overwhelmed with distribution problems slowing the delivery of masks and protective gear for medical personnel in the hard-hit areas. In addition, officials are battling to contain panic among Italians who are stocking up on bottled water, long-life milk and other non-perishable food that have left some supermarket shelves empty.

Italy’s Foreign Ministry lashed out Wednesday at fake news reports exaggerating the emergency, The ministry said the Italian government was now sending daily reports through diplomatic channels so foreign countries had “accurate and transparent” information on which to base travel advisories and business travel decisions.

Italy is in some ways a victim of its own scrupulousness, with virologists noting that it is registering so many cases because it’s actively looking for them.

Borelli noted that Italy had tested 9,462 people already — more than 95% of whom have tested negative. Of those who are positive, two-thirds are being treated at home without requiring hospitalization.

WHO Europe chief Dr. Hans Kluge complimented Italy for its management of the emergency, but said it needed to “scale up” its response. He also noted shortcomings, particularly in outfitting medical personnel with necessary masks and protective gear.

Doctors and nurses are “the front-line heroes” of the response, Kluge said at a news conference with the Italian health minister at his side.

“We need to train them and provide them with the necessary protective equipment,” he said.

He said it was important to avoid creating panic and keeping the measures proportional to the risk.

Borelli, the civil protection chief, acknowledged the mask supply problems Wednesday. He said the government had met with producers to centralize the distribution system to make sure the gear gets to the provinces where they were needed.

Rome authorities reported some good news on an otherwise bleak day: Both Chinese tourists from Wuhan who have been treated at the Spallanzani infectious disease hospital have now tested negative after more than two weeks of anti-viral treatment.

But alarm, caution and panic spread in Italy and beyond.

At a high school in Vienna, students were kept inside to be tested for the virus after a teacher who recently returned from a trip to Italy started showing symptoms of the virus, Austrian media reported. The test came back negative.

Elsewhere, authorities in Austria placed an apartment complex in the southern town of Bad Kleinkirchheim under quarantine after a 56-year-old woman from Italy died overnight. That test, too, came back negative and the quarantine was lifted.

Syracuse University was sending home 342 students on its study abroad program in Florence, and Ireland’s Six Nations rugby match against Italy in Dublin on March 7 was postponed.

In Croatia, where a second case was confirmed in the twin brother of a young man who contracted the virus in Milan, Prime Minister Andrej Plenkovic warned against hoarding.

“Panic should stop,” Plenkovic said. “Don’t go shopping in such a way that others cannot buy groceries.”