Virus adds to fears for targets of Muslim crackdown in China

WASHINGTON  — The spread of a new virus in China has deepened fears about the targets of a mass crackdown on ethnic Muslims in the far west of the country, human rights advocates said Wednesday. 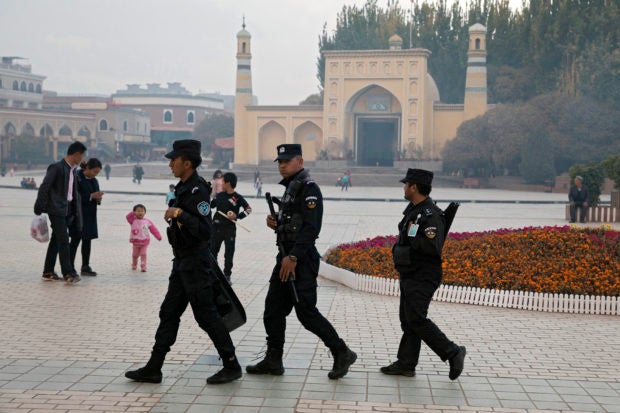 FILE – In this Nov. 4, 2017, file photo, Uighur security personnel patrol near the Id Kah Mosque in Kashgar in western China’s Xinjiang region. A database obtained by The Associated Press offers the fullest and most personal view yet into how Chinese officials decided who to put into and let out of detention camps, as part of a massive crackdown that has locked away more than a million ethnic minorities, most of them Muslim. (AP Photo/Ng Han Guan, File)

The Uighur Human Rights Project released video and social media posts from China suggesting that many people are quarantined in their homes and unable to get food, creating a potential hunger crisis in a region under a government crackdown since April 2017.

Members of the group also expressed alarm about the potential spread of the new coronavirus among the mass detention camps where the State Department says more than a million Uighurs and other ethnic Muslims are held without charge.

China has reported 555 cases of the virus among prisoners, though not yet from the detention camps in the Xianjiang region where witnesses say about 60 people are held per cell, so cramped together they are forced to sleep in shifts, and deprived of adequate food or medicine while being subjected to torture.

Kuzzat Altay, president of the Uighur American Association and the son of a detainee, called on China to open up the region to international news organizations and other independent monitors and urged the World Health Organization to inspect the camps.

China has rejected criticism of its crackdown and said the camps are “re-education” and vocational schools. But many of those held are highly educated, retirees and business owners.

The government on Wednesday also downgraded the threat posed by the virus in the Xinjiang Uygur Autonomous Region as new cases decline, according to state-run Xinhua news agency.