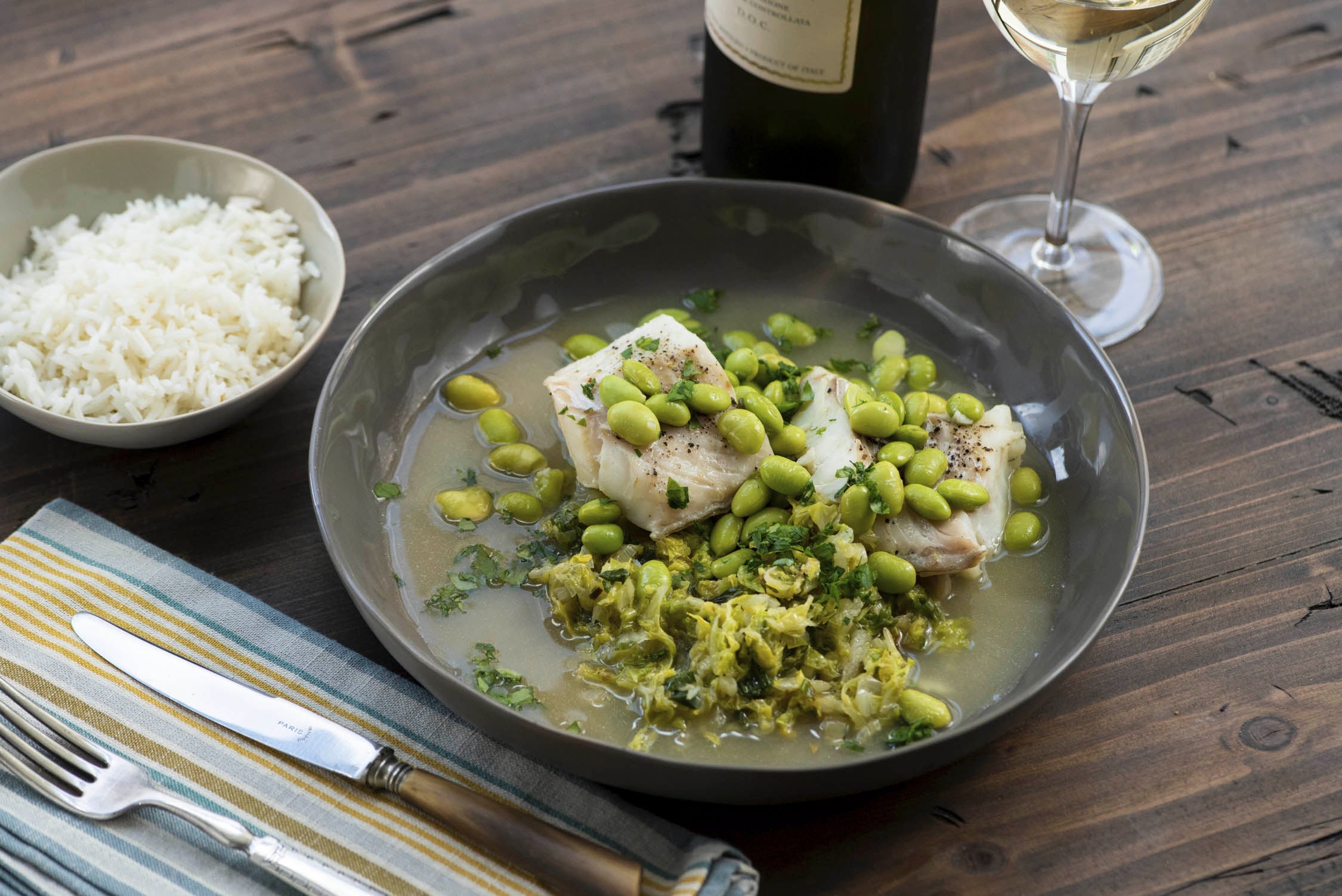 SOYBEAN DISH Edamame, which is quite popular in Japan, is a versatile bean that can be mixed in various dishes or eaten plain as boiled or steamed snacks. Members of a farmers’ cooperative in Cabanatuan City, Nueva Ecija, are producing this crop for the first time for export to Japan. —KATIE WORKMAN VIA AP

MANILA, Philippines — A group of farmers in Cabanatuan City made history on Tuesday with its harvest of the country’s first commercial crop of edamame, or young soybean, which could open fresh opportunities for local producers and traders to penetrate a foreign market.

Edamame resembles the local “chicharo,” or pea, but with fewer seeds in the pod. It is a staple in East Asia, often as an appetizer, snack or an ingredient in some dishes. In Japan, it is served boiled or steamed and often paired with alcoholic drinks or added to noodle dishes, stews, salads and soups.

Edamame seeds were brought to the Philippines about two months ago by the agricultural trading company Top Shelf Corp. and the exporter Jelfarm Fresh Produce Enterprise, which are now working with a Nueva Ecija farmers’ cooperative to produce tons of it through contract growing.

“We have been exporting okra to Japan for years, and we saw the potential of bringing in edamame here. Japan’s demand for edamame is huge, and it usually imports from Taiwan, Thailand and China. This partnership will not only broaden our export market but we also want to help our farmers,” Jeffrey Fernandez, Jelfarm executive assistant, said in an interview with the Inquirer.

By the time the farmers finish their work, Jelfarm expects that 95 tons of edamame would have been harvested from their 20-hectare pilot farm in Barangay Talipapa in Cabanatuan City, Nueva Ecija.

The harvest will be transported to Jelfarm’s factory in Tarlac where it will be cleansed in mineral water thrice before being packaged in 100-gram bags after careful selection.

Farmers could rake in a net earning of as much as P25 per kilo of Grade A edamame for export to Japan, according to Fernandez. He said a hectare could produce up to 8 tons of edamame.

That compares with a net earning of about P3 per kilo that a farmer could make from a ton of rice per hectare.

According to the Bureau of Plant Industry, local soybeans could fetch about P27,200 per ton and about P32,000 if they are organic, but that is the total before production expenses are deducted. Depending on the variety, a hectare could yield 2.42 tons to 14.76 tons of local soybeans.

The goal of Top Shelf and Jelfarm is to expand local edamame production to 700 ha in the next two years by introducing the crop in Central Luzon, Ilocos and Cagayan Valley. They also plan to broaden their export market to include South Korea, Australia and the United States.

Agriculture Secretary William Dar, who led the harvesting on Tuesday, said edamame was categorized as a “Tier 1 cash crop” due to its high income potential.

Edamame does not require much water to grow because it thrives in warm and dry conditions. It can also be harvested after only 62 days, resulting in more planting cycles compared  with rice and corn.

“This [harvest] is historic because this will put Cabanatuan City [on] the global map of trading and will benefit both farmers and businessmen,” Dar said.

The Department of Agriculture (DA) has been advocating and strongly supporting a partnership between the private sector and the farmers.

“This big brother-small brother approach is the way to go to advance agricultural growth,” he said.

Securing a market for agricultural products gives farmers a huge incentive to shift to high-value crops, but they would also need financial assistance and training from private entities and the government.

Dar said this new collaboration was a good model to follow to develop high-value crops, and added that the DA would include edamame in the agency’s P1.3-billion crop diversification program set to begin next year.

Former Candaba Mayor Jerry Pelayo worked as the middleman for the private sector and the farmers’ cooperatives.

What attracted Pelayo to edamame was its resilience to El Niño conditions and that it could also be intercropped with other vegetables, rice or corn.

“You know what’s even better? Our harvest are even better than those coming in from Thailand and China. Ours are crispy and tasty even [when] raw. That means this crop is more suited to the soil and weather of the Philippines, and we already have a market in Japan,” he said.