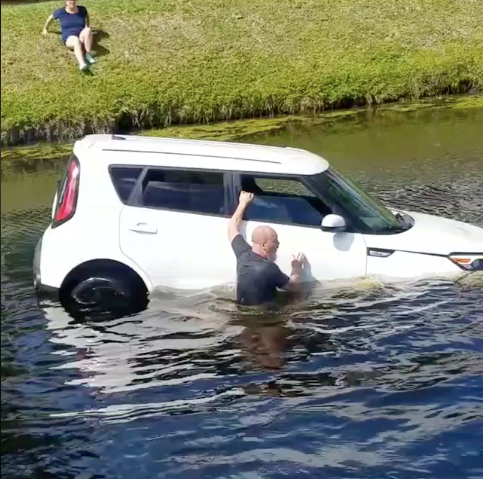 A man rescued a woman inside her sinking car in the United States. Image: Facebook/Shawn Turner

A father did not think twice about jumping into a canal in Florida, United States, to save a woman left trapped in her sinking car. Luckily, the car driver survived and is thankful for her rescuers.

The local hero Shawn Turner said that his son spotted the floating vehicle first. Turner was bringing his kids home when they passed by the scene. Without hesitation, the father got out of his car, took his pants off and jumped into the water.

Turner immediately checked on Pedrone once he was in the water, as seen on his Facebook video last Monday, Feb. 24. When the father discovered that the driver could not get out, a few people from the scene immediately suggested getting a hammer to help her break free.

Two other good Samaritans jumped in to help Turner rescue the woman. Turner was able to bring the window down the passenger seat and enter the SUV while the car continued to sink deeper down the water.

From behind the camera, a voice could be heard shouting “Dad jump out!” as the car began sinking at a faster rate engine-first into the water. While they were trying to grab the victim out of the car, Turner instructed the people on land to grab a knife.

Turned told the local news outlet that he and his two other rescue companions used the knife to cut Pedrone free from her seatbelt.

Pedrone is currently recovering in the hospital after acquiring two black eyes from hitting her head on the car’s steering wheel.  She also has difficulty speaking since she bit her tongue during the car crash. As per the report, the woman has been suffering from epileptic seizures for 13 years.

“I’m so thankful for Shawn’s help and the help [of] the other bystanders,” she was also quoted as saying. “I can’t fathom what it would’ve been like without them.” Cha Lino/NVG