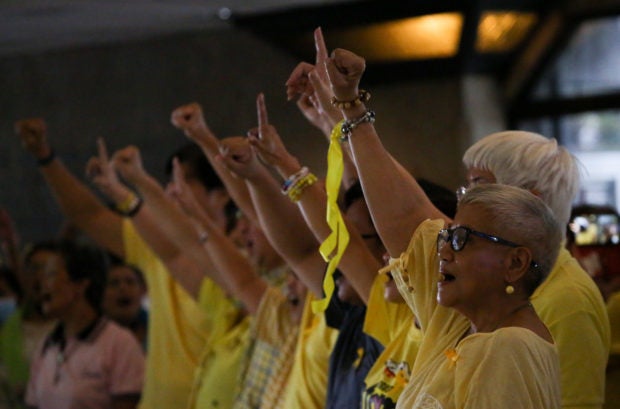 PEOPLE POWER Raising clenched fists and the “L” sign, former presidential peace adviser Ging Deles (right) and other former officials sing the protest anthem“Bayan Ko” after a Mass to celebrate the 34th anniversary of the Edsa People Power Revolution that toppled dictator Ferdinand Marcos and sent him and his family fleeing to Hawaii on Feb. 25, 1986. —LYN RILLON

MANILA, Philippines — President Rodrigo Duterte on Tuesday urged Filipinos to set aside their “petty political differences” as his administration came under fire from his critics for thrashing civil liberties and constricting the democratic space restored by the revolt that ousted dictator Ferdinand Marcos 34 years ago.

In a statement issued on the anniversary of the February 1986 Edsa People Power Revolution, Duterte said the four-day uprising was “one of the most remarkable events” in Philippine history.

“Inspired by the freedoms that we secured in February 1986, let us all rise above our petty political differences so that we may, together, ensure that the legacy of Edsa will remain relevant in the years ahead,” the President said.

He hoped that “the succeeding generations of Filipinos will also have the courage, strength and determination to protect, defend and preserve the liberties that we have won during that historic revolution.”

“For its important role as a catalyst for the restoration of our democratic institutions more than three decades ago, the People Power Revolution remains as, beyond doubt, one of the most remarkable events in our nation’s history,” he said.

As the official government celebration got underway at the Edsa People Power Monument in Quezon City, which Duterte again skipped this year, hundreds of members and supporters of Bagong Alyansang Makabayan (Bayan) and its allies in Manila and other cities staged rallies against what they said was Duterte’s tyrannical rule.

In Manila, around 1,000 marched on Mendiola against the Red-tagging of activists and human rights workers and threats against press freedom, particularly the President’s attacks on ABS-CBN.

Bayan Muna Rep. Carlos Isagani Zarate noted that like during the Marcos regime, the administration was trying to silence critics, adding that the closure of ABS-CBN for failure to get a new franchise from the administration-dominated Congress would have a “chilling effect” on other media organizations.

In Cebu City, some protesters threw tomatoes at the face of the President on posters during a rally of about 400 people.

About 200 members of militant groups in Bacolod City called for the President’s ouster.

In Bacolod, protesters offered flowers at the monument of then Sen. Benigno “Ninoy” Aquino, a staunch opponent of Marcos who was assassinated on his return from US exile in August 1983.

Elmer Forro, Bayan secretary-general in Panay, said the political restoration of the Marcos family and intensifying attacks against activists, lawyers and religious persons “show that the danger of a return to tyrannical rule remains and that we should resist and oust this regime.”

The brief and low-key official celebration at the Edsa People Power Monument in Quezon City on Tuesday morning was attended by about 1,000 government officials and employees.

“It’s better this way. Cleaner. More solemn. No traffic obstruction,” he said, noting that the program lasted only 12 minutes.

Malacañang earlier said Mr. Duterte could not be forced to attend the rites if he did not want to.

Christopher Carrion, Spirit of Edsa Foundation founding chair, said the rites were deliberately simplified partly due to worries over the COVID-19 virus.

Many of the key figures during the revolt have died or are too old to participate, he said.

Romeo Completo, a retired government employee, said it was understandable how the number of participants in the celebrations has dwindled over the years.

“The new crop of children would no longer be able to imbibe the spirit (of Edsa) but we are here to go on,” the 81-year-old said, promising to continue attending the rites “while I am still strong.”

In Makati City, a handful of veterans of the uprising commemorated the anniversary at the Ninoy Aquino Monument at the corner of Paseo de Roxas and Ayala Avenue, site of weekly protest marches that featured yellow confetti after Aquino’s assassination.

Binay, a former human rights lawyer who was detained during the Marcos regime, said the problem Filipinos now face was “the law is being used against the people” and mere suspects “are being killed left and right.”

“But we should not lose hope. All evils shall come to an end. Let’s pray that the true essence of democracy shall return,” Binay said.

Fr. Flavie Villanueva, who helps widows and orphans of Mr. Duterte’s drug war, told the Inquirer at the Edsa Shrine that “it’s good to commemorate.”

“But what is there to cele­brate when people get killed every day?” he asked. “How can we celebrate when there has never been so huge a mass murder in our country?”

Fr. Albert Alejo, another activist priest, said that, while memory was a “powerful gift,” it was no longer enough.

“We need to be as alert, as vigilant as the people who were here before,” he said.