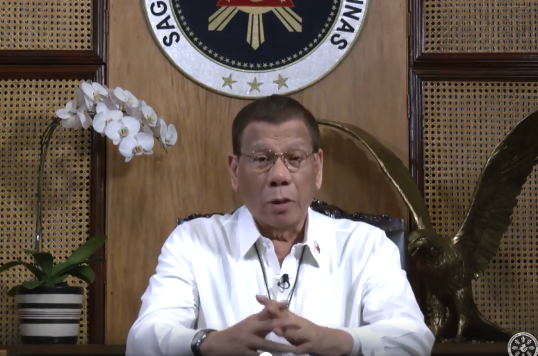 MANILA, Philippines — As the country commemorates the 34th People Power Revolution anniversary, President Rodrigo Duterte on Tuesday urged the public to “rise above” their “petty” political differences to keep the legacy of the Edsa revolution “relevant in the years ahead.”

In his message for the commemoration of the historic event, Duterte expressed hope that the next Filipino generations would also have the valor to “protect, defend, and preserve” the liberties won during the 1986 peaceful revolt.

“I, therefore, join the valiant heroes of Edsa and the countless others whose lives touched by this bloodless uprising in commemorating its 34th anniversary with the renewed hope that the succeeding generations of Filipinos will also have the courage, strength, and determination to protect, defend, and preserve the liberties that we have won during that historic revolution,” Duterte said.

“Inspired by the freedoms that we secured in February 1986, let us all, rise above our petty political differences so that we may, together, ensure that the legacy of Edsa will remain relevant in the years ahead,” he added.

The President also acknowledged that the People Power Revolution remains “one of the most remarkable events in our nation’s history”.

Like in previous years, the President is not scheduled to attend the ceremonies at Edsa. He will lead on Tuesday afternoon the Change of Command Ceremony of the Presidential Security Group at Malacañan Palace.

Since assuming office in 2016, Duterte, who has openly expressed his admiration for Marcos, has never attended all government-led celebrations of the historic Edsa People Power anniversary.

Duterte is a known friend and political ally of the Marcoses. His father, Vicente, was a member of the deposed strongman’s Cabinet, but his mother, Soledad, was a supporter of the opposition.

In 2016, the President allowed the burial of the Marcos at the Libingan Ng Mga Bayani amid massive opposition.