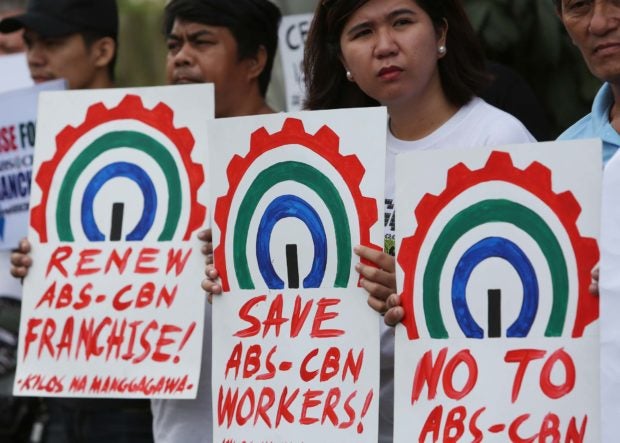 MESSAGE TO CONGRESS In and out of the Senate, ABS-CBN supporters on Monday appeal to lawmakers to renew the franchise of the TV network for the sake of its reported 11,000 employees. —MARIANNE BERMUDEZ

MANILA, Philippines — The mea culpa came four years late and was issued while the media conglomerate was facing an existential threat.

At the hearing of the Senate public services committee, a chastened ABS-CBN Corp. on Monday apologized to President Rodrigo Duterte for airing an advertisement critical of him and for failing to air his provincial or regional political commercials during the 2016 presidential campaign.

Asked by senators about the President’s public tirades against the network, ABS-CBN president and CEO Carlo Katigbak explained why ABS-CBN felt that it had to air the anti-Duterte ad that featured children questioning his profanity-laden statements.

He also detailed why the network had failed to air some of Duterte’s ads promoting his candidacy.

“[W]e were sorry if we offended the President. That was not the intention of the network. We felt we were just abiding by the laws and regulations that surround the airing of political ads,” Katigbak said.

He added that ABS-CBN along with its chair, Mark Lopez, “does not have and will not have its own political agenda.”

While Malacañang is “glad” that ABS-CBN has “finally admitted” its lapses, it is entirely up to the President if he will accept the apology, according to his spokesperson, Salvador Panelo.

At a press briefing in Malacañang on Monday, Panelo said ABS-CBN should have apologized a long time ago before the Chief Executive expressed his “displeasure” at the network.

While he acknowledged that the network had shortcomings it was working to resolve, Katigbak said ABS-CBN had not violated the law or the terms of its legislative franchise.

ABS-CBN’s 25-year franchise ends on May 4 (not March 30 as earlier reported), but the House of Representatives has yet to hear bills that would renew its franchise, raising the specter of the network signing off.

In addition, Solicitor General Jose Calida petitioned the Supreme Court on Feb. 10 to void the franchise, saying that the media conglomerate violated not only the constitutional ban on foreign ownership of media but also its franchise.

Katigbak said ABS-CBN decided to air the anti-Duterte ads paid for by former Sen. Antonio Trillanes IV because the Fair Election Act considered ads against a candidate to be lawful election propaganda.

Another reason ABS-CBN’s internal committee greenlit the commercial was that its revised version showed the children merely asking questions.

“We felt that it did not violate any of our internal policies,” Katigbak said.The third reason: Under the code of the Kapisanan ng mga Brodkaster ng Pilipinas, the network was required not to discriminate against any candidate and must accommodate anybody who brings a legal advertisement.

As for the unaired ads of Duterte, Katigbak said ABS-CBN had shown all of his national ads worth P117 million during the 2016 campaign, but it had not aired all of his provincial or regional ads.

The unaired ads were a frequent subject in the President’s tirades against the network and he had even threatened to file estafa charges against it.

This was because the network had a first-come, first-served policy, and many of Duterte’s spots were ordered on May 3, four days before the last day of the campaign period.

Katigbak noted that there were many previous telecast orders that came ahead of Mr. Duterte’s.

He added that ABS-CBN had refunded P4 million, which Duterte accepted, but it was delayed in returning P2.6 million, which the President did not accept.

“On this issue, I think we acknowledge our shortcoming in our failure to release that refund in a timely manner and we corrected that,” the network head said, adding that in the 2019 campaign, ABS-CBN implemented a policy of returning a check if the ad was not aired in seven days.

The discussion of the issue also prompted senators to complain about unaired ads.

Candidates feel bad if the spots they paid for do not appear on TV, even if the money was refunded later, said Zubiri. He also said the next franchise of the network could include provisions to prevent this.

Sen. Francis Pangilinan also said that even some of the ads of the candidates of the Liberal Party did not air over ABS-CBN, so both sides of the political divide experienced the same thing.

It was Sen. Lito Lapid, a former ABS-CBN talent in the top-rating television show “Ang Probinsyano,” who brought up the President’s anger at the network and asked if this was why it was having difficulty getting its franchise renewed.

ABS-CBN chair Mark Lopez said the network did not know the reason for the President’s anger except for what he said in his speeches.

Go also brought up the issue about Trillanes’ ad and the unaired ads.

Go said Duterte’s reasons for complaining about the network were not “shallow.”

He considers the issue “troublesome” because, according to him, the media are supposed to be neutral and impartial. He asked about guarantees that ABS-CBN’s actions would not be repeated.

“If this was done to a candidate who is a mayor in Davao, what more to ordinary Filipinos and ordinary citizens who are afraid to fight back?” Go asked.

All the President wants is fair and true reporting, he said.—With a report from Julie M. Aurelio