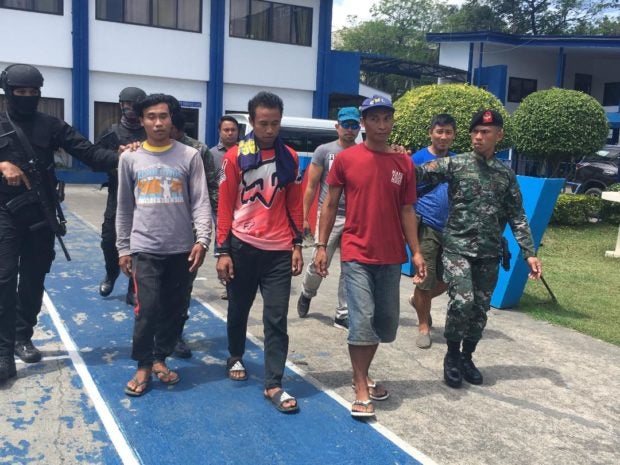 CEBU CITY—Three suspects in the killing of four policemen last year in the town of Ayungon, Negros Oriental had been arrested in separate operations on Negros Island.

Belly Ebedo, 23, was arrested in Siaton town, Negros Oriental on Sunday, Feb. 23, while his two sons—Jelly and Gelie—were taken into police custody in Murcia town, Negros Occidental and Bacolod City last Feb. 18 and 22.

The three suspects, who worked as construction workers, were among 10 persons who were charged with murder for the ambush that killed the four policemen in Ayungon on July 18, 2019. Murder is a nonbailable offense.

Brig. Gen. Albert Ignatius-Ferro, Central Visayas police chief, said police have a “credible witness” pointing to father and sons as “among the gunmen” in the Ayungon attack.

Ferro said investigators had determined that Ebedo and his two sons were members of New People’s Army, the armed branch of the Communist Party of the Philippines.

In 2019, police also arrested four other suspects in the Ayungon attack.

Ferro said three other suspects are at large.

Ferro said the four policemen had been victims of a barbaric attack by NPA, citing autopsy results.

“They were abducted, tortured and executed,” Ferro said. “It was a barbaric act and a transgression of the basic right of any individual,” he said.

The four policemen were riding on two motorcycles when they were waylaid and shot by an undetermined number of rebels.

Investigators said the attackers took the policemen’s firearms. Their motorcycles were also missing.