KUALA LUMPUR, Malaysia – Malaysia’s alliance government under 94-year-old Prime Minister Mahathir Mohamad is threatening to unravel less than two years after a historic election victory ousting the coalition that had ruled the country since independence. 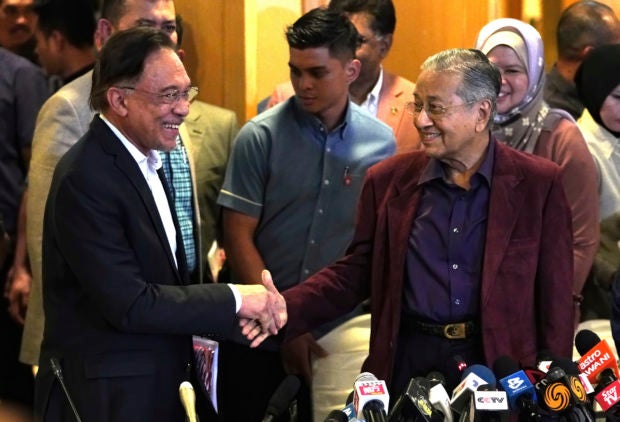 In this picture taken Saturday, Feb. 22, 2020, Malaysian Prime Minister Mahathir Mohamad shakes hand with successor Anwar Ibrahim in Putrajaya, Malaysia. Anwar says he wants Mahathir to be given space to run the country without pressure and that he has to “be patient”. (AP Photo/Vincent Thian)

Startling political maneuvers have sparked expectation that Mahathir will pull his Bersatu party out of the four-member ruling alliance and team with his former foes to form a new government in a major political upheaval that could further polarize the multiracial nation.

The maneuvers would keep Mahathir in power and thwart his named successor Anwar Ibrahim from taking power, replaying their decades-old feud. They were Malaysia’s top two leaders in Mahathir’s first stint as premier but fell out politically before reuniting in the political pact that ousted a corruption-tainted government in the May 2018 election.

Their relationship has been testy, with Mahathir refusing to set a date to relinquish power despite a preelection agreement to hand over power to Anwar.

Anwar confirmed late Sunday there were attempts by some Bersatu members and “traitors” from his party to form a new government. But he noted that the situation was still fluid.

His party deputy president and Economics Minister Azmin Ali, along with a number of lawmakers including Bersatu President and Home Minister Muhyiddin Yassin, huddled with opposition leaders Sunday at a hotel in a Kuala Lumpur suburb.

Ironically, the maneuvers would restore to power the Malay party of disgraced former leader Najib Razak, who with several of his party leaders are standing trial for corruption. It would also propel to national power a fundamentalist Islamic party that rules two states and champions Islamic laws. The two Malay parties still have strong support from ethnic Malays, who account for 60 percent of Malysia’s 32 million people.

Azmin, Muhyiddin, along with leaders from Najib’s party, the Islamist party and two other parties from Borneo island, reportedly met Sunday with Malaysia’s king to seek his backing. Rumors of an announcement on the new government didn’t pan out Sunday night but Anwar said it could materialize Monday.

At a prayer meeting at his house, Anwar told supporters he was “shocked” with the developments that he said was a “betrayal” of the agreement in place on the power transition. But he was calm and called it a “small trial,” saying he has overcome harder times. He even joked that while he may not be Malaysia’s eighth prime minister, he could be the ninth.

Anwar and his wife Wan Azizah Wan Ismail, who is currently the country’s deputy prime minister, are due to meet the king later Monday. Wan Azizah tweeted that “men can plan but Allah decides,” urging supporters to believe God will side with those who are patient.

Mahathir has remained silent as many Malaysians reacted with dismay and shock on social media, saying moves to form a “backdoor” government would be unethical and that a new election should be called if the ruling alliance collapses.

Analysts said King Sultan Abdullah Sultan Ahmad Shah could decide which faction has the majority support in Parliament or call a snap election. They warned that such a new government could give rise to Malay Islamic supremacy that will derail Malaysia’s multiethnic society.

“Mahathir’s top political priority is to stave off Anwar’s increasingly vigorous claim on the premiership. So he had to work with otherwise unsavory opposition parties to form a working parliamentary majority to counter and warn off Anwar,” said Oh Ei Sun, a senior fellow at the Singapore Institute of International Affairs.

“If the new government goes through, Malaysia is heading toward a a very regressive stage whereby racial supremacy and religious extremism would become the rule of the day.”