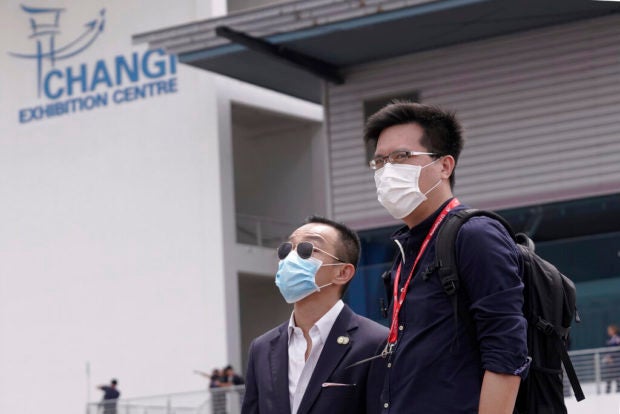 MANILA, Philippines — Two Filipinos are among 11 confirmed cases of the new coronavirus in the United Arab Emirates (UAE), according to the Philippine Embassy in Abu Dhabi.

The condition of the first patient, a 43-year-old who tested positive for the virus on Feb. 8, is “not improving,” the embassy reported on Saturday.

He has been transferred to another hospital, where he is being monitored closely, the Department of Foreign Affairs (DFA) said on Sunday, quoting the embassy report.

It said the embassy was working closely with UAE authorities to make sure the patient “is being given maximum care and support.”

The second patient, a 34-year-old who tested positive for the virus on Friday, is in “stable condition,” the DFA said.

The UAE Ministry of Health and Prevention on Friday said the 34-year-old Filipino and a 39-year-old Bangladeshi were confirmed to have been infected with the new coronavirus, bringing the country’s total confirmed cases to 11.

It said the two latest cases had come in contact with recently confirmed cases of the virus.

Fifty-one other Filipinos have been infected by the new coronavirus that is spreading from China. Two are maids in Hong Kong and 49 are members of the crew of the coronavirus-wracked cruise ship Diamond Princess moored off Yokohama, Japan.

As of Sunday, the DFA still planned to fly home more than 400 Filipinos on the cruise ship on Tuesday, excluding those who are infected with the virus.

The DFA and the Philippine Embassy in Tokyo, which is handling the logistics for the repatriation, expect to get on Tuesday the test results and see if any of the 489 other Filipino passengers and crew members of the vessel are infected.

Foreign Secretary Teodoro Locsin Jr. said on Sunday that the tests had been completed but not all the results had been released.

The DFA said the confirmed cases were hospitalized. Two have been discharged and five are expected to be released this week, it said.

The cruise ship with more than 3,700 passengers and crew was quarantined off Yokohama on Feb. 6 after authorities learned that a former passenger who got off the vessel in Hong Kong had tested positive for the new coronavirus.

Hundreds of passengers disembarked from the ship on Wednesday after the 14-day quarantine ended, but a Japanese woman who had gotten off the vessel tested positive for the virus on Saturday.

On Sunday, Japanese Health Minister Katsunobu Kato apologized after it was found that 23 other passengers were allowed to leave without being properly tested.

“This may be why Japan offered to host the Filipino crew before their repatriation for testing,” Locsin said on Twitter, retweeting the news report.

“So far, Feb. 25 is repatriation day,” he added, thanking Japan for the hospitalization of the Filipinos who had tested positive for the virus.

The repatriation date remained unchanged despite reports on Sunday that the more than 1,000 crew on board the ship would be quarantined again for 14 days.

The Filipinos who will be flown home also face another 14-day quarantine.

“It is deemed best for the Filipinos to be brought home and temporarily housed at Athletes’ Village in New Clark City under the full medical attention of health professionals from the Department of Health (DOH),” the DFA said on Saturday.

It said employees from the Philippine Embassy in Tokyo and the DFA and a team from the DOH would accompany the Filipinos, who would be transferred by land from the Port of Yokohama to Haneda airport in Tokyo, where they would take a chartered flight home.

Thirty Filipinos who had been repatriated from Wuhan city, the epicenter of the new coronavirus epidemic in China’s Hubei province, as well as the five DOH medical team members, five DFA employees, six plane crew and three ground workers who helped to bring them home, had been discharged from Athletes’ Village in Capas, Tarlac province, after a two-week quarantine.

Health Secretary Francisco Duque III said on Friday that no one among the 49 was infected.

They continue to be monitored by the DOH, though, according to Assistant Health Secretary Maria Rosario Vergeire.

“In the event that they experience any symptoms, we want to know,” Vergeire said in a television interview on Saturday.

The DOH has now observed 608 people for the new coronavirus. As of Sunday, according to the department’s daily tracker, 131 of those people remain in isolation at hospitals and 474 have been discharged.

The local confirmed cases remain three, including two who have recovered and been discharged and one who has died. All three are Chinese from Wuhan who traveled to the Philippines.—With reports from Tina G. Santos and AFP