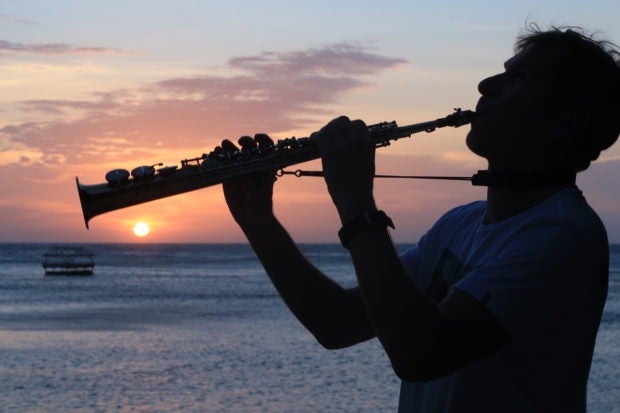 BACOLOD CITY, Negros Occidental, Philippines — Anders Paulsson, a renowned soprano saxophonist from Sweden, has written a song dedicated to an environmental group here that works to protect and conserve Danjugan Island, a marine reserve off Cauayan town in Negros Occidental.

Paulsson said the Philippine Reef and Rainforest Conservation Foundation Inc. (PRRCFI) could use his song for any fundraising dedicated to its conservation work on Danjuagan Island and ocean clean-up.

The title of the song — “The Eyes of All Future Generations Are On Us” — is a quote from Greta Thunberg, the 17-year-old Swedish climate change activist.

“Like her, I also needed a civilized way to express my anger and frustration at the accelerating degradation of our life-supporting ecosystems,” Paulsson said.

Since his debut in Carnegie Hall in Midtown New York City in 1992, Paulsson has been widely recognized as one of the finest soprano saxophonists in the world and has performed concerts in 27 countries.

His musicianship has inspired a succession of over 50 international composers to write solo concertos and chamber music for him.

Paulsson is the co-founder of Coral Guardians, an organization that combines music and science to raise awareness about the world’s coral reefs and what is needed to safeguard them for future generations.

As artistic director of Coral Guardians, he said they combined music and science to raise awareness about the world’s coral reefs such as those in Danjugan and what is needed to safeguard them for future generations.

“Since my life’s prime goal is to support conservation and Philippine Reef and Rainforest Conservation Foundation Inc. in particular, the song is dedicated to PRRCFI,” said Paulsson, who was volunteer diver counting corals on Danjugan Island about 20 years ago.

According to Paul Lizares, PRRCFI trustee, Danjugan Island is 1.5 kilometers long and 500 meters wide and has five lagoons. It is covered with limestone forests, providing asylum to many wildlife species that struggle to exist in the mainland.

“What once used to be a threatened and over-fished area is now a protected sanctuary with a dazzling array of marine and terrestrial life,” he said

Today, the island serves as an outdoor classroom for students, a research area for conservationists, and a haven for tourists eager to experience nature at its purest, Lizares said.

The island has incredible biodiversity given its small size, Lizares said.

According to him, the island has least 72 bird species, including a nesting pair of white-breasted sea eagles (Heliatus leucogaster) that have been breeding atop the Typhoon Beach Camp since 1974, and Tabon scrub fowl (Megapodius cumingi) which are common around the island.

At least 10 bat species and 22 butterfly species — with Pachliopta phlegon recorded for the first time in Negros Occidental — have also been documented on the island, he added.

The island also has about 17 species of mangroves, 572 fish species belonging to 139 genera, 244 species of hard corals, 8 species of seagrass and 74 species of macroalgae recorded, Lizares added.

“This marine sanctuary [Danjugan] is now an educational center for school children and it has been awarded the best-managed reef in the Philippines,” Paulsson said.

He pointed out that leaders and elected officials must be held accountable and responsible to navigate towards a more sustainable future in order to preserve and protect this amazing natural wonder and world heritage.

“If we do not stop the destruction of the natural world, nothing else matters,” Paulsson added.