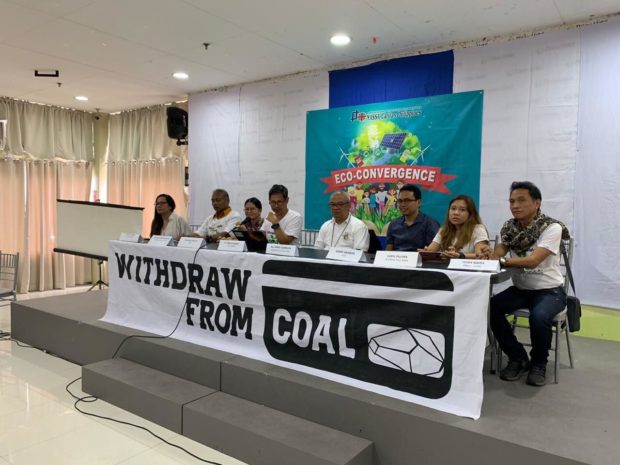 Representatives from the church and environmental protection groups at the launch of Eco-convergence in San Carlos City. CONTRIBUTED PHOTO

SAN CARLOS CITY — Church leaders and civil society organizations on Friday urged Philippine banks to stop funding the coal industry because of coal power’s detrimental impact to the people and the environment.

They made the call during the launch of the Church-CSO Empowerment for Environmental Sustainability (ECO-CONVERGENCE), a gathering of faith-based organizations and environmental advocates from all over the Visayas island group and from national organizations.

“Today, the Church, civil society organizations, and advocates of clean energy gather to uphold the care of our people and our common home by urging Philippine banks still funding coal to cut off the funds which empower coal developers to continue poisoning the Filipino people and the environment,” said the group in a joint statement.

“In the Philippines, 13 local banks have lent or underwritten US $6,303 million to coal expansion projects from 2017 to 2019. They have been among the major funders of the Therma Visayas project and Panay Power Station, two coal-fired power plants that are now spewing poison upon affected communities in Toledo City, Cebu and Iloilo,” the group noted.

“We call on the Filipino public, the depositors and shareholders of local banks, to join us in strangling the lifeblood of coal power plants in the country. Through this action, we can properly act to respond to the climate emergency we all face,” they said.

The group said coal plants are on their way to become stranded assets and liabilities as renewable energy continues to become even more viable and as the global response to the climate crisis strengthens with the expected rise of policies restricting coal’s playing field.

They also noted that the people of Visayas have repeatedly been at the forefront of extreme climate events. Typhoon Yolanda in 2013 placed Visayan islands in global headlines due to the massive deaths and havoc it caused, and it has since been followed by typhoons of intensifying destructiveness, the group said.

“The Philippines has repeatedly been identified as one of the countries most threatened by climate change. It must be taking the lead in making sure coal bids the world goodbye the soonest. Instead, the Philippines continues to invest in coal as a source of power, which is profitable only to a very small segment of the population,” they said.

“The beginning of 2020 marks the world’s entry into the last decade left to avert even more catastrophic climate change. We urge Philippine financial institutions still keeping coal alive to withdraw their support from coal as a new decade’s resolution and as fulfillment of their moral and financial responsibilities to the Filipino people,” they said.