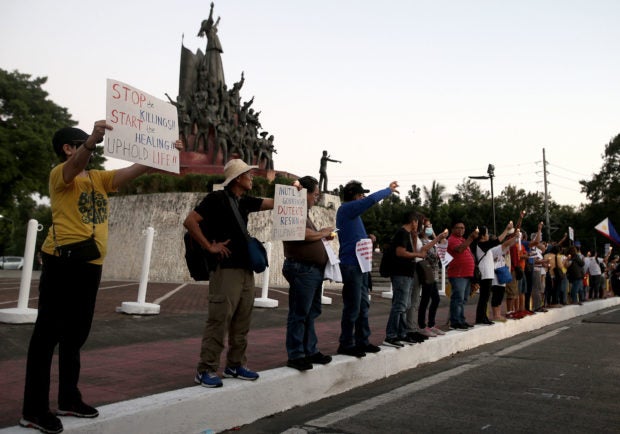 REVIVING THE SPIRIT OF PROTEST Demonstrators gather at Edsa to commemorate the People Power Revolution, which began exactly 34 years ago on Saturday. The four-day uprising toppled the dictatorship of Ferdinand Marcos, whose family, however, has had a resurgence in the present political scene. —RICHARD A. REYES

MANILA, Philippines — The color yellow has become inseparable from the Aquino family and its allies, President Duterte’s most frequent foil. But whether one actually supports them seems to matter little as even nominal Duterte critics are branded “dilawan,” or one of the “yellows.”

Some youth activists, however, are running toward rather than away from the color in an effort to revive the spirit of the movement that toppled dictator Ferdinand Marcos. The 1986 Edsa People Power Revolution will mark its 34th anniversary on Feb. 25.

“It was once a symbol of fighting against oppression,” said Jason del Rosario, spokesperson for Youth Resist, a coalition of such groups as Millennials Against Dictators and the Student Council Alliance of the Philippines. “If we go back to what it really symbolized, it’s welcoming back hope.”

That color of resistance originated from the 1973 song, “Tie a Yellow Ribbon Round the Ole Oak Tree,” by Irwin Levine and Russell Brown about an ex-convict returning home.

Inspired by the song, members of the anti-Marcos movement and supporters of the former Sen. Ninoy Aquino welcomed his return from exile in the United States on Aug. 21, 1983, by tying yellow ribbons along the streets from the airport to his Quezon City home.

He never saw the ribbons because he was murdered right on the airport tarmac.

For mass movement, not a man

“But tying that yellow ribbon wasn’t just about Ninoy,” Del Rosario said. “It was welcoming what Ninoy represented. It was welcoming the spirit of fighting against Ferdinand Marcos.”

RJ Naguit, Akbayan Youth chair, is advocating for the youth to “reclaim” the color, which, at its core, he said, was the color of hope.

“The ‘dilawan’ brand is being used now to malign people, to destroy the opposition,” Naguit said. “But it’s really about a time when Filipinos helped one another oust a dictator.”

He said it was a color that belonged, not to a particular politician, but to a mass movement.

“Young people shouldn’t be so caught up in narratives of ‘dilawan,’ or being ‘DDS’ (Diehard Duterte Supporters), or aligning themselves to seemingly polar opposites,” Naguit said.

“It’s time for young people to find our own yellow ribbon.”

Another youth group, Tindig Kabataan, is urging people through social media to tie yellow ribbons “anywhere, everywhere” in the lead-up to Feb. 25, saying it was time to “take back our color.”

The Yellow Ribbon Movement led by Vicky Garchitorena and Margie Juico, who both served under the late President Corazon Aquino, and other groups are also calling on Filipinos to display yellow ribbons on Feb. 24.

To help generate momentum for the “yellow movement,” Soliman and her group are eyeing support from the youth, many of whom were not yet born before the 1986 uprising.

Jarring parallelisms“There is a premise that people have forgotten, that people are no longer focusing on [the gains of the Edsa revolt], but that is not completely true,” she said. “There are still those who remember and wish to bring back democracy but … you get the sense you will be yellow-tagged. Or worse and more dangerous, that you would be Red-tagged.”

Soliman said the yellow ribbons were a creative way of “expressing our desire to call for go­vernment accountability,” noting the jarring parallelisms between events that transpired during the Marcos regime and those under the Duterte administration, including another attempt to shut down ABS-CBN, the rise of a new oligarchy and the persecution of political enemies.

“Many are asking, ‘Will there be another People Power?’ No. Number one [reason] is still the people’s fear,” Soliman said.

Embracing that “yellow movement” was essential to keeping the spirit of Edsa alive, the youth groups said. Although around 2 million massed on Edsa, the antidictatorship struggle was often simplistically framed as Marcos vs Aquino.

Del Rosario said Edsa was a culmination of broad multisectoral protests, including the First Quarter Storm, which was a series of student demonstrations that marked its 50th anniversary this year.

A key player in what became known as the Yellow Friday Movement, a Mindanao-based opposition to the dictator in the 1970s and ’80s, was Soledad Roa Duterte, or Nanay Soling, the President’s mother.

Luz Domingo, whose interest in the movement waned in the years after Edsa, said there was a fundamental failure on the part of progressive groups then to build on Edsa and continue engaging those who joined the uprising.

“When martial law hit, I wasn’t immersed yet in acti­vism. I guess I was at the level of a sympathizer,” Domingo said, reflecting the feelings of many young people at the time. “And after Edsa the engagement stopped completely.”

“It was normal for activists to grow scared, let go of their convictions, or simply shift course in their lives,” she added.

Now working for the human rights group Hustisya, Domingo said her commitment was revived after her daughter entered the University of the Philippines and became an activist herself.

Domingo’s loss of enthusiasm was a symptom of the larger failings of Edsa, making the struggle of today’s youth groups also a conscious effort to avoid the mistakes made by their forebears.

Naguit laments that the People Power Revolution was a “wasted opportunity.”

Del Rosario said yellow has become “a symbol of elite po­wer” due to a “massive smear campaign by the people in power” and also to real frustrations with the two Aquino presidencies, which failed to resolve problems like yawning economic inequality.

But the commemoration of People Power brings a fresh opportunity to remind Filipinos that the work of Edsa is still unfinished, he said.