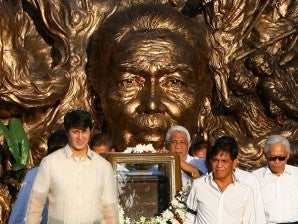 The remains of Tandang Sora is formally transferred by his living relatives from the Himlayang Filipino to Quezon City Hall where a vigil is set to commemorate the 200th anniversary of the Filipino Hero. INQUIRER/ MARIANNE BERMUDEZ

When heroine Melchora Aquino, aka Tandang Sora, comes “home” Friday to a new shrine built in her honor in Banlat, Quezon City, all that will be placed there are three small pieces of her bones.

But even if her bones eventually crumble to dust, her descendants vow to honor her legacy and valor even more fervently.

“We involve the younger generation in our activities so that she will not be forgotten by our children and grandchildren. We want them to remember her selflessness by living it,” said Josephine Geronimo, a fourth-generation descendant and president of the Grandchildren of Melchora Aquino Association.

Geronimo stood as witness as the city government Thursday formally received the remains of Tandang Sora which were exhumed at Himlayang Pilipino, a private cemetery, along with several artifacts such as a piece of broken glass and the handle of her coffin.

“There were no longer any big bones left. Perhaps what remained came from the skull,” said the city health officer, Dr. Antonieta Inumerable, who witnessed the exhumation.

The recovered bones and artifacts were sealed inside a wooden casket less than two feet long, and brought on a hearse to city hall, where a party led by Mayor Herbert Bautista and Vice Mayor Joy Belmonte graced the solemn turnover.

The hearse arrived in the late afternoon as a brass band played and a choir sang in tribute. Among the hundreds of onlookers were city hall employees who stayed after office hours just to catch a glimpse of the relics.

The remains were to stay at city hall for an overnight vigil, prior to their transfer today to the newly constructed Tandang Sora Shrine in Banlat, the heroine’s birthplace.

It was only fitting that she would be brought back to Banlat Friday, the 200th anniversary of her birth, said Aldrin Cuna, the city mayor’s chief of staff.

Tandang Sora’s family requested that her remains be transferred to Banlat during the term of Bautista’s predecessor, Feliciano Belmonte Jr. It was only last year that Bautista’s administration got Himlayang Pilipino’s consent.

The oldest surviving great-grandchild is 93-year-old Isabela Roxas, according to the organization’s secretary Nenita Reyes, who came to Thursday’s rites with a scrapbook containing photocopied pictures of Tandang Sora, including a grainy shot taken on her wedding day.