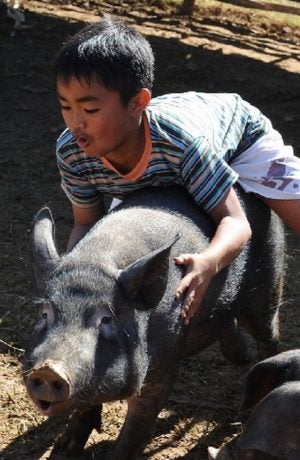 BONDS The pig is important to Cordillera villagers because it has a role in their traditions, and is sacrificed and shared during “cañao” (ritual feast). Highland towns have taken the spread of the African swine fever very seriously. —EV Espiritu

LEGAZPI CITY—A positive result for African swine fever (ASF) in tests done on 23 pigs that died in Bombon town, Camarines Sur province, on Friday led local governments in Bicol to declare lockdowns in their respective areas to avoid the spread of the disease.

As a preventive measure, the Department of Agriculture (DA) declared a lockdown in Bombon after organ samples from dead pigs collected on Feb. 10 in Barangay Sto. Domingo there turned out positive for ASF, according to findings of the animal disease diagnostic reference laboratory at the Bureau of Animal Industry in Quezon City.

This meant that hogs, pork and pork products coming in and out of Bombon would not be allowed.

On Friday, Gov. Al Francis Bichara directed the veterinary office to place Albay under lockdown to prevent the entry of ASF in the province.

Bichara said checkpoints would be set up in provincial boundaries to monitor and ban the entry of hogs and pork products in Albay, particularly pigs coming from identified ASF-hit areas in Camarines Sur and other provinces in Luzon.

The checkpoints would be established in the boundaries of Libon, Polangui, Daraga and Tiwi.

Naga City, located only 9 kilometers from Bombon, was also placed under lockdown by local officials on Friday.

Alex Templonuevo, acting regional director of the National Meat Inspection Service in Bicol, said there were also reports of swine deaths from backyard piggery owners in nearby areas.

Emilia Bordado, DA Bicol spokesperson, said the agency on Thursday sent a team to conduct culling of at least 250 pigs in eight ASF-hit villages in Bombon.

Bordado also said veterinary personnel who performed the culling would undergo isolation for 15 days in a designated qua­rantine facility in the town.

Camarines Sur was placed on the red alert status on Thursday following the confirmation of ASF cases in Bombon. Red alert status means the emergency operations center of each town will be activated.

In Pangasinan, more than 4,000 hogs were culled in the province since the first ASF case was recorded in Mapandan town in September last year, a DA report said.

The viral disease affecting hogs has spread to 10 other towns and cities in the pro­vince, affecting local hog raisers who continue to report income losses due to the outbreak.

“We can’t do anything about the situation. All we know is that it (culling) is for public safety,” said a backyard hog owner from Barangay Tuliao in Santa Barbara town, which was placed under surveillance for ASF.

The hog raiser, who asked not to be named, said village officials had told her that butchering pigs was no longer allowed and that a government veterinarian was scheduled to visit to get blood samples for testing.

Records from the DA showed that the most number of culled pigs came from Malasiqui town with 1,171 and Bayambang town with 1041. —WITH A REPORT FROM YOLANDA SOTELO