HANAU, Germany  — A German who shot and killed nine people of foreign background in a rampage that began at a hookah bar frequented by immigrants had posted an online rant calling for the “complete extermination” of many “races or cultures in our midst,” authorities said Thursday. 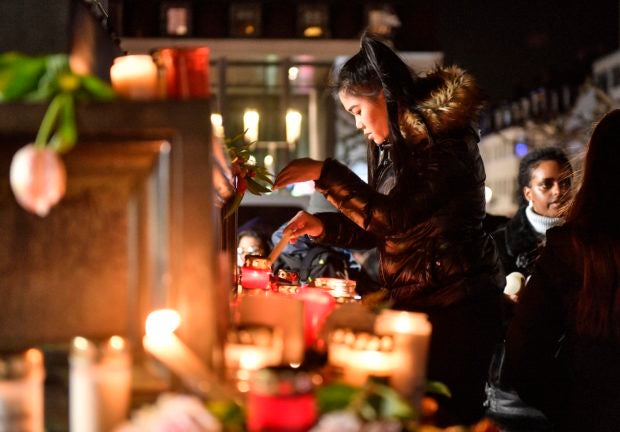 A woman lights a candle at a monument on the market place during a mourning for the victims of the shooting in Hanau, Germany, Thursday, Feb. 20, 2020. A 43-year-old German man shot and killed nine people at several locations in a Frankfurt suburb overnight in attacks that appear to have been motivated by far-right beliefs, officials said Thursday. (AP Photo/Martin Meissner)

German Chancellor Angela Merkel said the attack exposed the “poison” of racism in the country.

The gunman, Tobias Rathjen, 43, was found dead at his home along with his mother, and authorities said they were treating the rampage as an act of domestic terrorism.

Turks, ethnic Kurds and people with backgrounds from Bulgaria, Bosnia and Romania were among those killed, according to news reports. Turkey’s ambassador said five of the dead were Turkish citizens. People of Turkish background make up Germany’s single largest minority.

Rathjen opened fire at the hookah bar and a neighboring cafe in the Frankfurt suburb of Hanau around 10 p.m. Wednesday, killing several people, then traveled about 2.5 kilometers (1.5 miles) and fired on a car and a sports bar, claiming more victims.

In addition to the dead, six people were injured, one seriously, authorities said.

Hookah lounges are places where people gather to smoke flavored tobacco from Middle Eastern water pipes. Metin Kan, who knew many of the victims, said it was obvious why the gunman chose the neighborhood.

“Look, a hookah bar there, a gaming parlor there, a doner kebab place there — it’s a place frequented by immigrants,” he said. “Why this hatred of foreigners? We all get along here.”

Kadir Kose, who runs a cafe nearby, said he was shocked at the extent of the violence: “This is a whole other level, something we hear about from America.”

The bloodshed came amid growing concerns about far-right violence in Germany and stepped-up efforts to crack down on it, including last week’s detention of a dozen men on suspicion they were planning attacks against politicians and minorities.

“This poison exists in our society and its is responsible for far too many crimes,” Merkel said, citing the killings of 10 people across the country between 2000 and 2007 by a far-right gang, the fatal shooting last year of a regional politician from her party, and a deadly attack outside a synagogue in Halle on Yom Kippur in October.

She pledged to stand up against those who seek to divide the country.

“There is much to indicate that the perpetrator acted out of far-right extremist, racist motives,” she said. “Out of hatred for people with other origins, other faiths or a different appearance.”

While investigators said it appeared the gunman acted alone, Germany’s federal prosecutor, Peter Frank, said authorities are trying to find out whether there were others who knew of or supported the attack. He added that his office is looking into any contacts the killer may have had inside Germany or abroad.

Peter Beuth, interior minister for the state of Hesse, said it does not appear Rathjen had a criminal record or was on the radar of Germany’s domestic intelligence agency.

Witnesses and surveillance video of the getaway car led authorities quickly to the gunman’s home, where he and his 72-year-old mother were found dead with gunshot wounds, apparently bringing the number of victims killed to 10.

Frank identified the gunman only as Tobias R., in line with German privacy laws, and confirmed he had posted extremist videos and a screed with “confused ideas and far-fetched conspiracy theories” on his website, which has since been taken down. He identified himself on the website as Tobias Rathjen.

“We now have ethnic groups, races or cultures in our midst that are destructive in every respect,” Rathjen wrote in his rambling, 24-page screed on his website. He said he envisioned first a “rough cleaning” and then a “fine cleaning” that could halve the world’s population.

“The following people must be completely exterminated,” he wrote, then went on to list two dozen countries, most of them Muslim.

Turkish President Recep Tayyip Erdogan called it a “heinous attack” and expressed confidence that German authorities “will exert all kinds of effort to shed light on all aspects of this attack.”

In his rant, Rathjen also detailed fears that he had been under government surveillance for years and blamed the monitoring for his inability to have a relationship with a woman. He also claimed to have approached police several times with conspiracy theories.

Separately, he sought help last year in finding out who was allegedly observing him from a Austrian man, Bernd Gloggnitzer, who teaches “remote viewing,” a practice that adherents claim gives them the ability to sense the unseen.

“I didn’t reply because I could tell from the email that he was a nutcase,” Gloggnitzer told The Associated Press. He said Rathien forwarded to him a criminal complaint that he had drawn up and sent to Germany’s federal prosecutors, and “it was one conspiracy theory after another.”

In the criminal complaint that he drew up, Rathien said that he worked for a price comparison website as a sales consultant but quit to devote all his attention to investigating the alleged surveillance. On his own website, he said he was born and raised in Hanau and earned a business degree.

He had a license to possess a gun, first issued in 2013, local authorities told Germany’s dpa news agency. Local media reported he owned three 9 mm pistols. Some 5.4 million of Germany’s 83 million people have guns. Owners must undergo background checks, including showing that they are not mentally ill.

German police were also examining a video Rathjen may have posted online several days before the attack in which he detailed a conspiracy theory about child abuse in the United States, dpa reported.

He made no reference to the far-right QAnon movement in the U.S., but the message was similar to the fringe group’s central, baseless belief that President Donald Trump is under attack from “deep state” enemies and that satanists and cannibals are running a child sex trafficking ring.